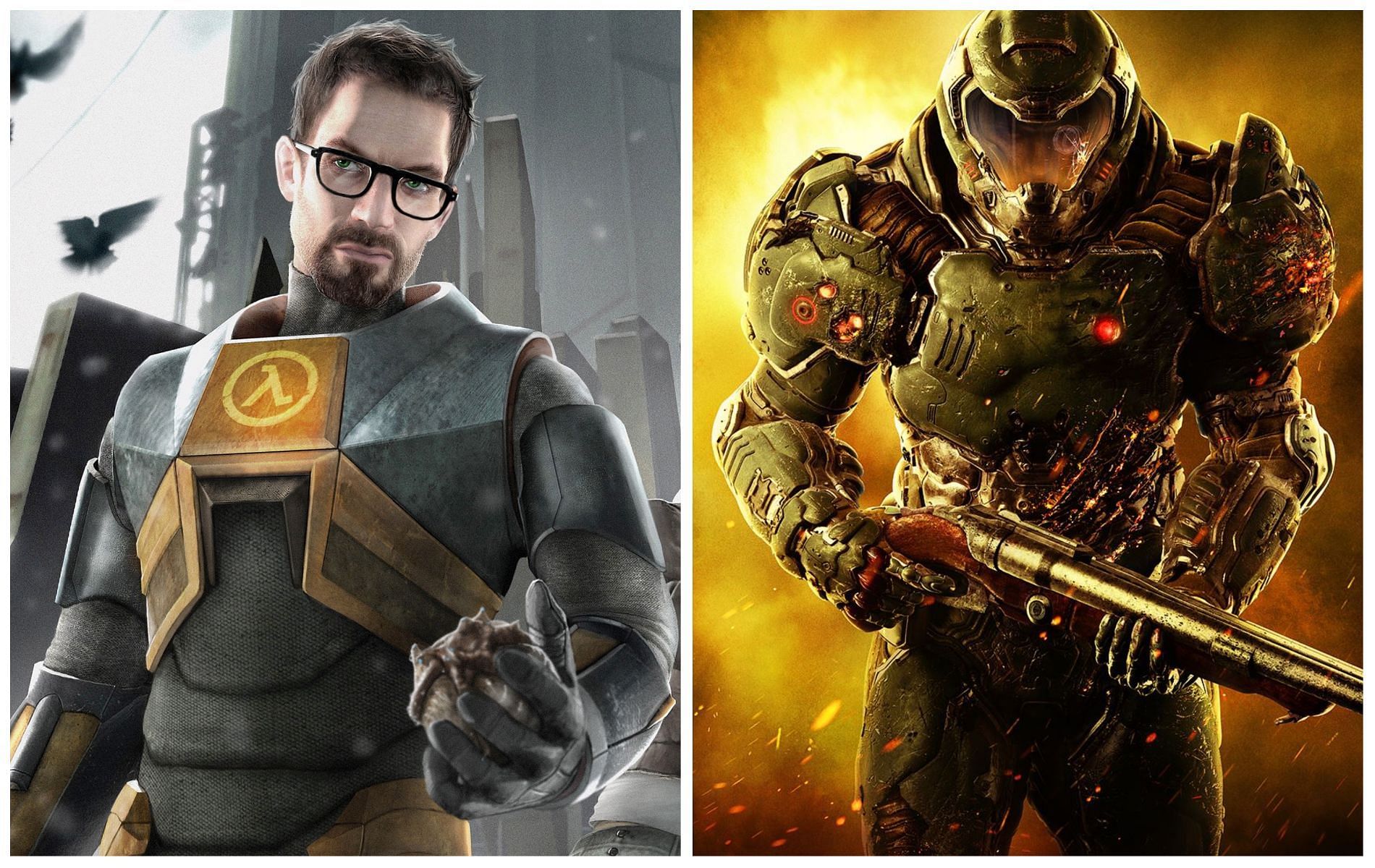 Narrative-driven video games rely heavily on their protagonists to deliver the desired experience. They are the lens through which players view the events of the game and experience the story as it unfolds. So, it is necessary for developers to craft a protagonist that works well within the context of their game.

Silent protagonists are characters who don’t speak throughout the entirety of the game. They interact with other characters as well as their environment, but never speak or lend us any insight into their psyche. Such protagonists are used to deliver an immersive role-playing experience to players, who can truly feel as if they are living through the events of the games.

Silent protagonists who were perfect for their respective video games

1) Doom Slayer in the Doom series

With a soft reboot of the series in 2018, Doom has a made a return to modern consoles. Focused on delivering fast-paced, demon-killing action that puts players in the Doom Slayer’s combat boots, these video games are a perfect fit for a silent protagonist.

Also known as Doom Guy, the protagonist is an ancient warrior who is awakened on one of Mar’s moons to battle the forces of Hell. Being a voiceless personality, he allows players to immerse themselves in the storyline as they unleash hell (pun intended) on their enemies.

Doom Guy being a silent and no-nonsense killing machine also adds to his mysterious personality.

2) The Hunter in Bloodborne

The Hunter is a customizable silent protagonist in FromSoftware’s Bloodborne. Players assume the role of the Hunter as he traverses the desolate city of Yarnham and battles various adversaries.

The origins, appearance, and abilities of the Hunter are fully customizable, and he never speaks throughout the game. This solidifies his role as a silent protagonist, as he is merely a vessel that delivers an immersive experience to the player.

The protagonist’s silent nature also adds to the mysterious environment of the game. Lore is revealed through exploration and progress throughout the storyline, rather than through the Hunter. By prioritizing the world over the protagonist, FromSoftware allows players to truly appreciate the plot of the game.

3) The Chosen Undead in the Dark Souls series

FromSoftware continues their trend of utilizing silent protagonists with the Dark Souls video games. The series is notorious in the world of video games for its difficulty, especially because of its creative and overpowered bosses. However, the lore and world-building within these games is just as impressive.

Through the role of the silent protagonist, players are constantly reminded how they are just mere pawns in the grand scheme of the world within the Souls video games. Similar to Bloodborne, players can customize the appearance and abilities of their protagonist and shape their origins accordingly.

With video games like Dark Souls and Bloodborne, FromSoftware has set the standard for the role of the silent protagonist who delivers a rich and engaging narrative.

4) Link in the Legend of Zelda series

Nintendo’s Legend of Zelda series is one of the most popular names in gaming. Since its first installment in 1986, the franchise has achieved tremendous critical and commercial success and has become synonymous with the Nintendo brand itself.

The protagonist of the game is called Link. Through decades of video games, he has had multiple versions and incarnations, but we have never heard him talk. The reason for this, as stated in the official narrative as canon, is that Link is focused on his tasks and simply prefers not to speak. However, his silence has more layers to it.

Link as a character is whatever the story of the game needs him to be. He is a surrogate for the players themselves and acts in accordance with the flow of the narrative. This allows players to feel truly immersed in the game, even if it comes at the cost of some emotional moments in the story feeling bland due to Link’s lack of communication.

The protagonist of Fable 2 is known as the Hero of Bower Lake, with the nickname “Sparrow,” given to them by their sister. They can be either male or female, depending on the player’s choice at the start of the game.

The Fable video games feature narrative and plot progression mechanics that are influenced by morality. The choices made by players at several points in the story shape its course and affect their overall experience. A silent protagonist is ideal for such a scenario.

Sparrow does not display personality traits or opinions of their own, allowing players to role-play as the character themselves and make their own choices independently.

Outlast is a first-person survival horror game developed and published by Red Barrell in 2013. It is one of the most unique and creative horror video games, with its first-person camcorder perspective.

Players assume the role of Miles Upshur, an investigative reporter who enters a psychiatric institution after receiving an email from a whistleblower to investigate the alleged suspicious activities.

Despite the immersive and engaging nature of the gameplay, players were left wondering how much better the experience would have been if Miles had expressed himself in the game. The lack of dialog and expression on his part hurts the immersion, as he experiences traumatic events without uttering a word.

Grand Theft Auto video games are known for their unique and vibrant characters. The franchise is one of the best-selling titles in gaming, with GTA 5 being the highest grossing game of all time. However, the series deviated from the norm with GTA 3.

Released by Rockstar games in 2001, the title chronicles Claude’s experiences as he seeks revenge on those who betrayed him in the colorful and violent Liberty City. However, for the first and only time in the series, the protagonist has no dialog in the game.

The appeal of GTA games is in the role-playing aspect, as players can control unique protagonists and experience the world through their perspective. A silent protagonist deprives players of this experience and hurts the delivery of the narrative in the long run.

Half-Life 2 is regarded as one of the best video games of all time. Released in 2004 by Valve, the game takes place twenty years after the events of the first game.

The plot follows Freeman as he is awakened in this futuristic world and has to fend for himself while battling antagonistic forces. He goes through a journey of epic proportions throughout the course of the game, as he joins a faction rebelling against the Combine and gradually earns a legendary status amongst the rebels.

These events and experiences would have been better had Gordon Freeman not been a silent protagonist. For an individual struggling to find his place in a dystopian and hostile world, we never get to truly explore his psyche or experience his feelings.

For a game as narratively masterful as Half Life 2, one can’t help but wonder whether Valve missed out on a good opportunity here.

Released by Bethesda in 2012, Dishonored is a first-person action game that follows the adventures of protagonist Corvo Attano, who is framed for the murder of the Empress. He is forced into the life of an assassin and embarks on a journey to seek vengeance against those who conspired against him.

Dishonored is extremely popular in the genre of stealth-based action video games. It received a positive critical reception on release due to its unique premise and execution. The narrative and plot of the game, though predictable at times, was engaging and entertaining.

However, the execution falters with the developers’ choice of making Corvo a silent protagonist. The inability to delve into the psyche of a character who has been wrongfully accused of murder hinders the overall experience of the game.

It is a missed opportunity on the part of the developers. The game would have been more immersive if players were able to understand Corvo’s perspective better.

Far Cry 5 takes the series to fictional Hope County in Montana, where players must face-off against Joseph Seed and his cult of religious fanatics.

Ubisoft’s Far Cry video games have always been known for their immersive open worlds and exciting antagonists. The narrative relies more on character interactions than the actual plot, which can be linear and predictable at times.

However, in Far Cry 5, the protagonist doesn’t speak or communicate with the other characters in the game. The lack of dialog is intended to put players in the shoes of the Deputy so that they can feel as if they’re the ones experiencing these events. However, by creating this divide between the protagonist and the villain, the game loses some depth in storytelling.

Far Cry video games are at their best when protagonists display some personality and interact with NPCs as well as the antagonists, such as Vaas in Far Cry 3.

The Beginner's Guide to Drones – Budget to Best – IGN