Bollywood Divas Whose Car Collections Are As Luxurious As Their Outfits 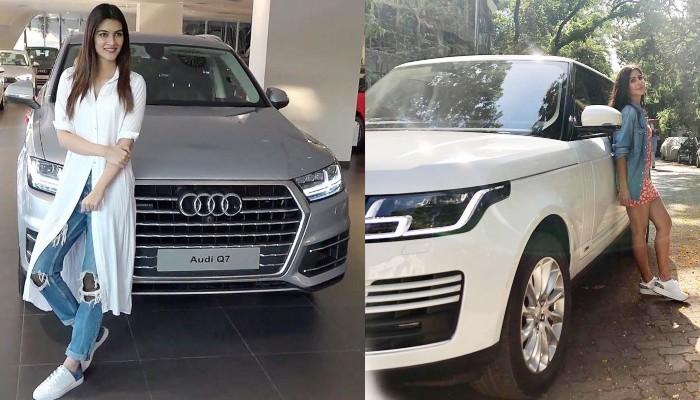 Apart from the multi-crore penthouses in Mumbai, Rolex watches on their wrist, Fendi and Chanel bags to slay their look, branded outfits from Louis Vuitton and Versace, or the exotic vacations, B-Town divas love flashing their luxurious possessions. However, another luxurious item that these actresses love to flaunt is their collection of swanky cars. Gone are the days when only our favorite actors used to flaunt their luxurious rides.

Whether it is a red carpet event or taking their luxurious cars for shoots, Bollywood divas have done all of it. While the heroes prefer sportier rides, the heroines opt for pure elegance, but they are no slouch when it comes to owning a luxury cruiser. Right from Priyanka Chopra’s Rolls Royce Ghost to Janhvi Kapoor’s Maybach, here are the luxurious rides owned by Bollywood actresses that prove their taste in cars is as classy as that of their choice of outfits. 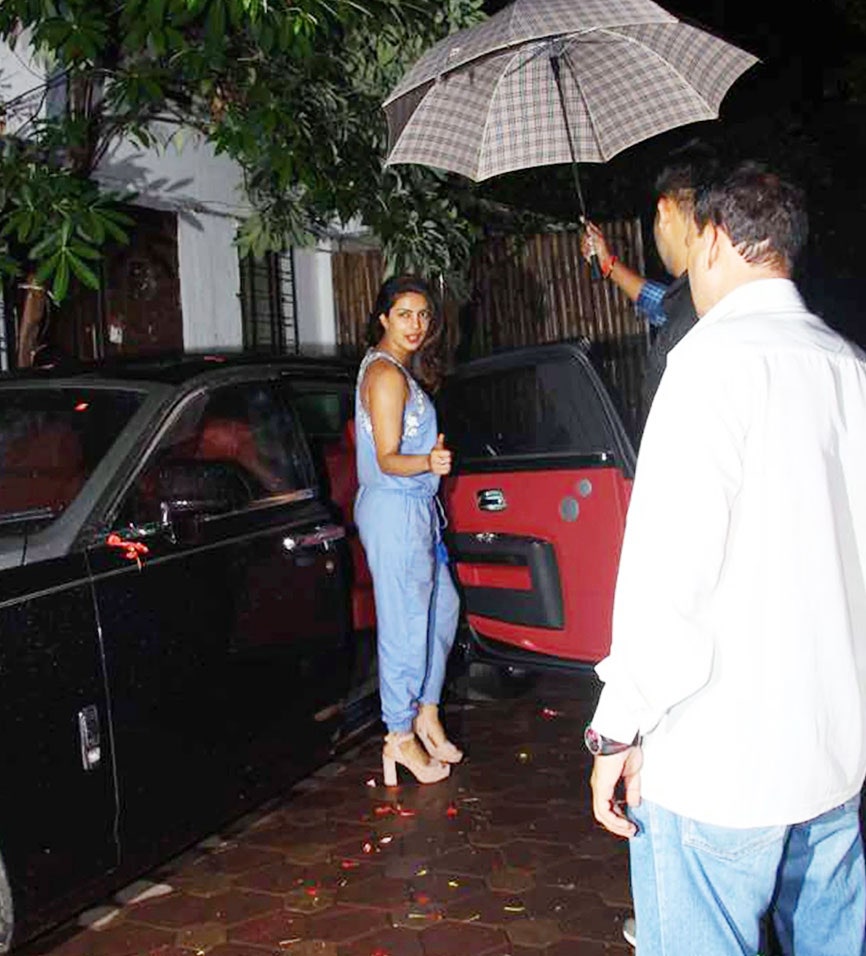 Whether it’s a post-brunch paparazzi shot or a red carpet moment, Bollywood actresses carry their elegance wherever they go. Hence, it’s understood that their rides must be elegant and sleek as well. Our desi girl is no exception. Therefore, Priyanka Chopra’s elegant black Ghost reflects on her personality with a customized silver top, starlit ceilings and stardust carpets. Besides these features, what makes it such a flamboyant ride is the BMW-made 6.6-liter twin-turbo V1, which makes 563-bhp of power. It is not unknown to the world that PeeCee makes no compromise when it comes to luxury travel. When she had bought the car, it was priced at Rs. 5.25 crores. 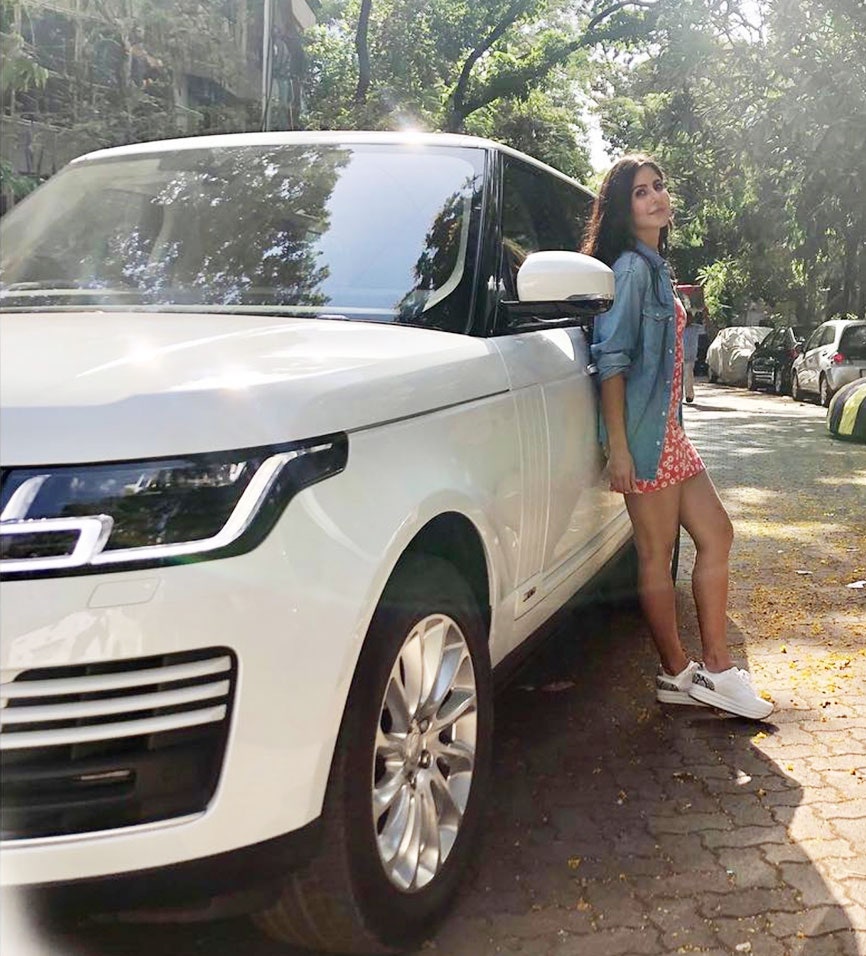 Katrina Kaif leaves no stone unturned to ensure that her onscreen presence is flawless. However, when it comes to flaunting her luxurious rides, she can give a tough competition to any other actor of Bollywood. One of her favorite rides is her white Range Rover SUV, which she had bought in 2019. An internationally acclaimed car that is a favorite of every celebrity, this car boasts of a huge 4.4 liter SDV8 diesel engine that churns out a good 335 Nm of power. Her Diesel LWB Vogue SE is priced at Rs. 2.10 crores to Rs 4.38 crores. When it comes to cars, Sunny Leone has a thing for Italian luxury, a Maserati being her favourite. The Indo-Canadian star had bought a limited edition of an all-black Maserati Ghibli Nerissimo in 2017. The actress is the proud owner of this luxurious piece as it was limited to only 450 units. Therefore, this is one of the most expensive as well as exclusive cars in her collection. It packs a Ferrari-exclusive/built Twin Turbo-charged 3.0-litre V6 engine and costs around Rs. 1.42 crore. The Begum of the chote Nawab of the Pataudi clan, Kareena Kapoor Khan, is often seen cruising around Bandra in her Range Rover Vogue. Belonging to a royal lineage makes the diva have an easy access to a royal fleet of cars. However, Bebo already has a luxurious garage for herself. She has a range of cars, including the Mercedes-Benz S-Class, Audi Q7 and BMW 7-Series, among others. However, the most frequently used and her most favorite car is the Range Rover Vogue which comes with a 5-litre gas tank. She owns an earlier-generation Vogue which starts at Rs. 1.74 crore. 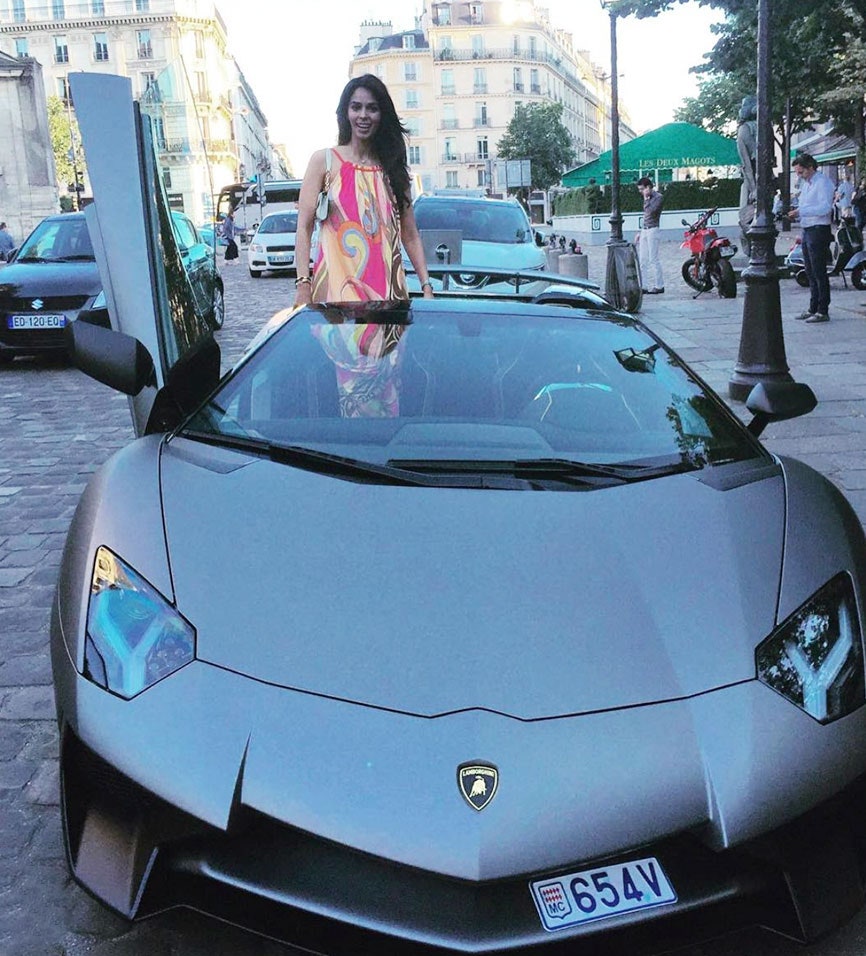 Mallika Sherawat is the only diva in Bollywood, who owns a Lamborghini. A couple of years back, she had taken to her Twitter handle to announce that she has been gifted a matte-black/grey Lamborghini Aventador SV. This raging Bull of Italy is powered by a 6.5-liter V12 engine that churns out 720-horsepower and 509-lb-ft of torque. When Mallika had bought the car, it was priced at Rs. 5 crores. However, it has now surged to Rs. 8 crores.

Suggested Read: Super-Luxurious And High-End Branded Cars That Are Parked At The Garage Of The Bachchans Residence Deepika Padukone knows how to ace the big screen and makes sure to make heads turn every time she steps out with her fashion sense. However, what many people do not know is that she also has a knack for luxurious rides. Perfectly fitting the affair is this Mercedes Maybach 500, which is basically a Mercedes-Benz S-Class with added opulence to justify the Maybach badge. It packs a 4.7-liter engine that can produce a maximum power of 453-horsepower along with a peak torque of 700-Nm. It was imported to India through a Complete Knocked-Down Unit and assembled here, and is available at a whopping amount of Rs. 1.67 crore. 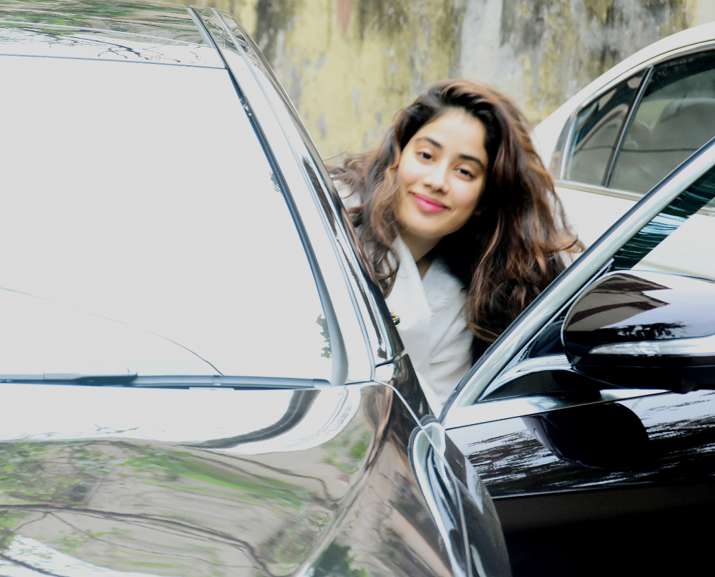 Set to be the next queen of B-Town, Janhvi Kapoor is following the footsteps of her mother, late Sridevi. Besides her aura and style, this diva slates into the list of the Bollywood actresses, who owns an ultra-luxe Maybach S560. Such is the beauty and the grandeur of this edition of the Mercedes franchise that you’d know that this car is carrying someone special at the first glance itself. Another interesting deet about this car is the number-plate as the last four digits are ‘7666’, which is the same as her late mother Sridevi’s white Mercedes-Benz S-class. The black beauty speaks class for itself and comes at a whopping amount of Rs. 2 crores. 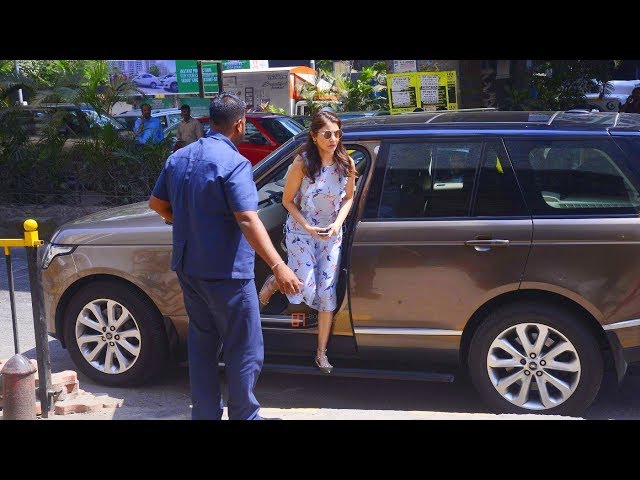 Anushka Sharma and her cricketer-husband, Virat Kohli, had purchased a Bentley Continental GT in 2018. This car possessed by the diva is deep blue in color and mostly remains parked at Virat’s home in Delhi. According to a report by Cartoq, the duo owns two Bentleys. While Bentley Flying Spur remains parked at Anushka’s house in Mumbai, the other one is used by Virat when he is in Delhi. The price of this car is between Rs. 4 crores to Rs. 4.6 crores. Range Rover Vogue is one of the most common cars owned by Bollywood celebrities. Malaika Arora is another famous Bollywood actress to own this car and uses her Range Rover quite frequently and is often seen arriving at it for events. Draped in a shade of dark blue, this beauty also boasts of a 3.0-litre V6 turbo-diesel engine which can churn out a maximum power of 240 Bhp along with a peak torque of 600 Nm and comes at a hefty price tag of Rs. 1.74 crore. 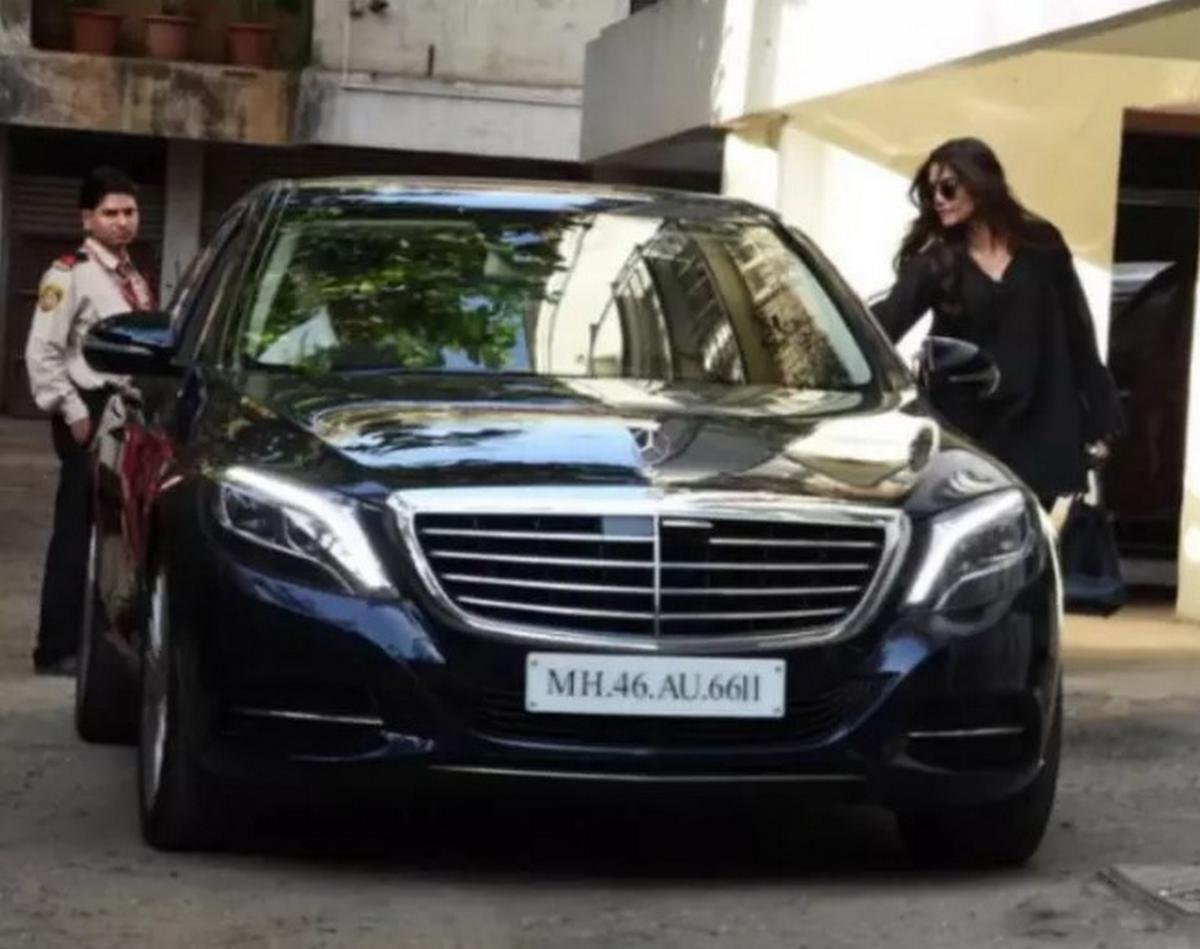 Sonam Kapoor’s acting and fashion game have always been top-notch. So how could she mess up when it comes to owning one of the proudest possessions of the Mercedes brand? She owns a Mercedes S-Class, which is a gift from her superstar-father, Anil Kapoor. The Kapoor family definitely knows how to live life king size. Therefore, they have a vehicle in their possession which is in the S400 format and costs approximately Rs. 1.28 crore. The S400 is powered by a 3.0L V6 motor which is good for 333 bhp against 480 Nm and is coupled with a 7-speed AT unit. Kriti Sanon’s movie, Mimi, had gathered a lot of accolades from critics and the audience. Therefore, to celebrate her movie’s success, the actress had gifted herself the popular Mercedes Maybach GLS 600 SUV – that has been a hot pick among Bollywood’s leading actors. Besides Bollywood actors like Arjun Kapoor, Ranveer Singh and Ayushmann Khurrana, Kriti is the only Indian actress to have the swanky new SUV from Mercedes Maybach. Her monstrous car, which is priced at Rs 2.43 crores, is imported in India and has only 50 units so far, while all the other pieces have already been sold out.

Here is a list of the beautiful, talented Bollywood leading ladies, who are also proud owners of some of the most expensive cars. What do you think about our divas’ obsession with these luxurious rides, and which one did you like the most? Do let us know!

AWESOME NEWS! Now you can download BollywoodShaadis app and never miss a story. Get App

AWESOME NEWS! Now you can download BollywoodShaadis app and never miss a story. Choose your device Android or IOS (Apple)