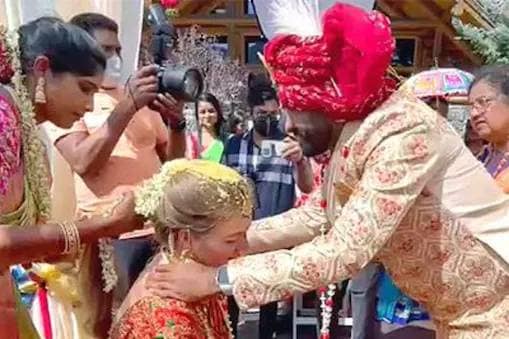 Marriage is a sacred bond. That marriage gets a meaning only when we live life understanding each other. Likewise, all marriages are done online. In America (America) the groom, in England (Bride) in India (India) bride and groom’s parents sit and wish online marriage is also going on. But there is a story here. The boy is from Andhra Pradesh, the girl is from Germany. Both have a love marriage. But they got married only in America. Similarly, this incident is a bit strange and we must know about the love story of this couple.

Shashank, the only son of Visakhapatnam-based retired officer and founder president of Visakha Kalasagar, Vanapalli Sreemannarayana, is based in Germany. Shashank, who was working in Germany, gets to know a young woman named Linda Muller there. A friendship develops between the two. Friendship eventually turns to love.

Also read: Viral Story: Neither married, nor girlfriend, but this young hero is the father of 48 children!

Similar marriages have taken place in the past. That’s why there are foreigners who visit various religious places in India and get married as per the tradition here. There are many examples of people coming to Dharamsthala and Kukke Subramanya temples from abroad and getting married as per the local tradition.

Also read: Army Background: These Bollywood actresses come from an army family! Must know about his family

One can find many foreigners here who have converted to Indian culture and assimilated the customs here. That’s why there are foreigners who worship Lord Krishna and worship Shiva. If you go to Uttar Pradesh, some parts of the Himalayas, you will find foreign monks who worship Lord Shiva and turn to meditation by giving up everything. There are many people who have converted to Indian culture, not through marriage.