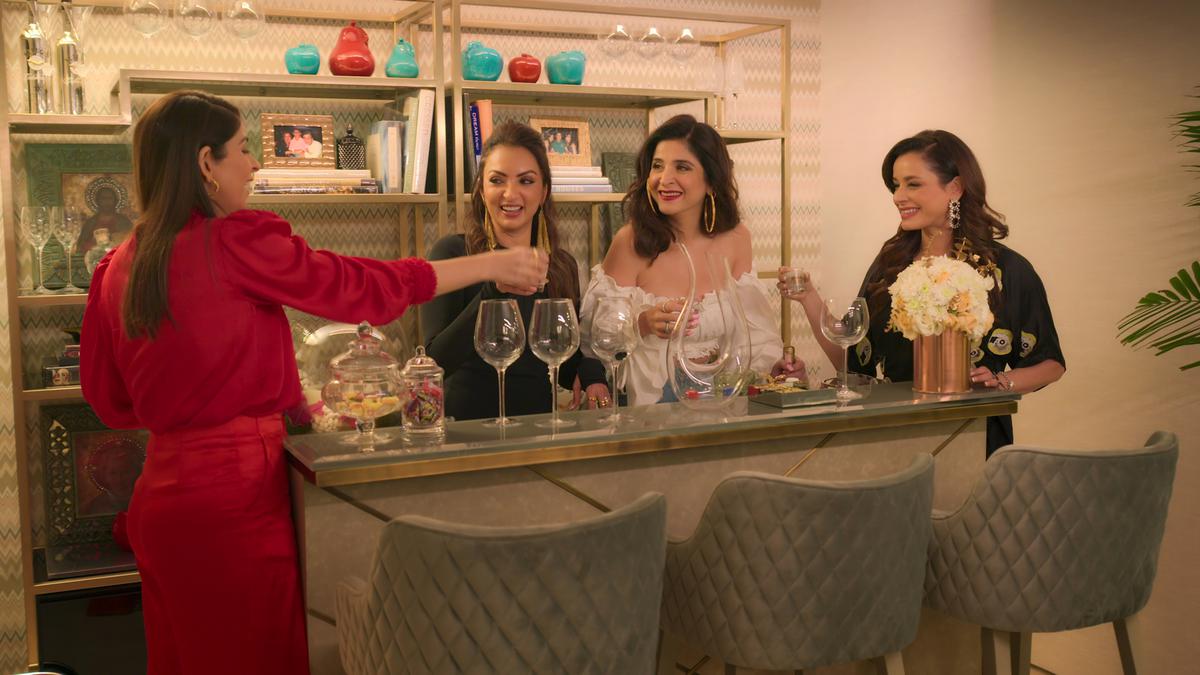 Fabulous Lives Of Bollywood Wives (Season 2) Review: When the first season of Fabulous Lives of Bollywood Wives (2020-ongoing) released on Netflix, the Hindi film industry aka Bollywood was still figuring out the balance between theatrical and OTT releases. A lot of movies got postponed. Some were shielded before going into production. And amidst all this chaos, when Maheep Kapoor, Neelam Kothari, Seema Khan, and Bhavana Pandey on the small screen to make a mockery arrived out of themselves, it gave us a sense of how out of touch they were.

Despite being the “Bollywood wives” of Sanjay Kapoor, Samir Soni, Sohail Khan (now divorced), and Chunky Panday, they celebrated their luxury, their wealth and their proximity to A-listers like Shah Rukh Khan. Since then, Bollywood (and everything around them) has gone through a massive shift. Has that impacted the aforementioned ladies and their families? Nope.

Karan Johar, Apoorva Mehta, and Aneesa Baig are the executive producers of Fabulous Lives of Bollywood Wives Season 2. The show’s creative director is Manu Maharshi and series director is Uttam Domale. The overarching narrative this time is Bhavana Pandey renewing her wedding vows with Chunky Panday. So, everyone is preparing for that, how they want to look, how the ceremony is going to look and so on and so forth. Then there are the subplots.

Maheep’s whole shtick is that she’s anxious about her daughter Shanaya Kapoor’s debut in Dharma Productions’ Bedhadak (TBA). Zoya Akhtar casts Neelam in the second season of Made in Heaven (2019-ongoing) and she is preparing for her kissing scene in it. Seema is dealing with her divorce with Sohail and preparing to launch her own clothing line. And there’s a cross-over with Indian Matchmaking (2020-ongoing) where Sima Taparia appears to help Seema get married again.

If this is your cup of tea, that’s fine. But with just a hint of context, that very tea is going to start looking like sewage water. Here’s why. For the past one year, Bollywood has to witness a slump; and the reason is plural in nature. Sushant Singh Rajput’s death exposed the cult-like behavior of the industry’s uppermost tiers. A bigoted section of the internet used this as an excuse to peddle their Islamophobia and “boycott” any film that’s not Hindu-appeasing or Government mandated propaganda.

Talking about propaganda, the industry’s boot-licking of the Government has grossed out everyone with a functioning brain. Add to that the financial crunch caused by the COVID-19 pandemic (and the films’ arrival on OTT platforms within a month of its theatrical release) and a massive chunk of the theater-going audience just isn’t watching Hindi films anymore. And this has concerned critics and trade-analysts, causing them to write think pieces about how we should sympathize with and help Bollywood in this hour of crisis.

Despite losing millions at the box-office; despite getting their movies shelved; And despite opting for an OTT release, if these Bollywood wives are living fabulously, what’s the point of this sympathy and help? This Netflix show, produced by Karan Johar, basically sends the message that the people in this industry don’t have to part ways with their opulence and comfort, come hell or high water. They will still fret about what kind of clothes they’ve to wear to a party or to the parlor. They will send their kids to universities in foreign countries. Gauri Khan is going to feature them in her adverts.

Karan Johar is going to arrange meetings with Badshah and Ranveer Singh for them. They are going to talk about planting trees to counter global warming and do nothing about it. They are going to fake cry while remembering the death of their housemaid. They’ll refer to the pandemic ever so jokingly and never address it as something that has kneecapped the industry they and their family are a part of.

Yes, Fabulous Lives of Bollywood Wives is aware of how cringe-worthy its central characters are. They capitalize on the very fact that they don’t have any self-awareness. It totally plays out like a non-fictional albeit dramatized version of Desperate Housewives (2004-2012), with the women objectifying Ranveer Singh. The showrunners make a mockery out of Maheep, Neelam, Seema, and Bhavana so that we can laugh at them. But the question still rises to the surface: how are they still maintaining this lifestyle?

If it’s their side-businesses that’s keeping them afloat, why isn’t that the show’s central focus? If that’s keeping the lights on and bringing food to the table, because the entertainment aspect of their lives is a total dud, then highlighting that can contrast the airheaded vibe of the show. But instead we get an ignorant scene with Arjun Kapoor where he hires a bunch of people (which is more than the people who showed up on the opening day of Ek Villain Returns) to sit in a theater with Shanaya and Maheep and see Shanaya’s showreel.

Talking about generating sympathy, just like the first season, Fabulous Lives of Bollywood Wives feels like a ponzi scheme to make the audience relate with the nepotism babies. For starters, Ananya Panday has starred in Student of the Year 2 (2019), Pati Patni aur Woh (2019), Khaali Peeli (2020), Gehraiyaan (2022)and Liger (2022). And she has delivered a sum total of one expression across all of those films. So, the general consensus is pretty negative. However, when you see her with her parents and her parents’ friends, the fact that she appears level-headed kind of decreases the air of negativity around her.

The same can be said about Shanaya Kapoor, who comes off as a reasonable person when put in front of Maheep and Sanjay. If that fills some seats at the screenings of Bedhadak, then the show’s mission is a success. That said, all this positivity is canceled out by Karan Johar and Ranveer Singh’s obnoxious shenanigans; thereby bringing the relatability level of this sorry excuse of a series back to zero.

In conclusion, Fabulous Lives of Bollywood Wives is another nail in the coffin that mainstream Bollywood is already in. It seems like Karan Johar and Co. have gathered to publicly state that Bollywood is going to be insular in nature, they are going to make bad products and sell them at sky high prices, and they are going to live deliciously. They are literally profiting off the fact that they are ignorant, sexist, toxic, and plain stupid. Hence, they don’t need to be relevant. But most importantly, they don’t need the sympathy of critics, trade analysts, or the audience.

We can keep our think pieces about the death of Bollywood (and how we need to chip in to resurrect it) to ourselves because they simply don’t need it. They are doing fine. And I agree with that notion. Don’t give your money to mainstream Bollywood. Save it and spend it on indie Hindi films and shows, and on all the interesting stuff that international entertainment industries are producing.

Where to watch Fabulous Lives Of Bollywood Wives (Season 2)