First among the equals of Old Bollywood’s heroes 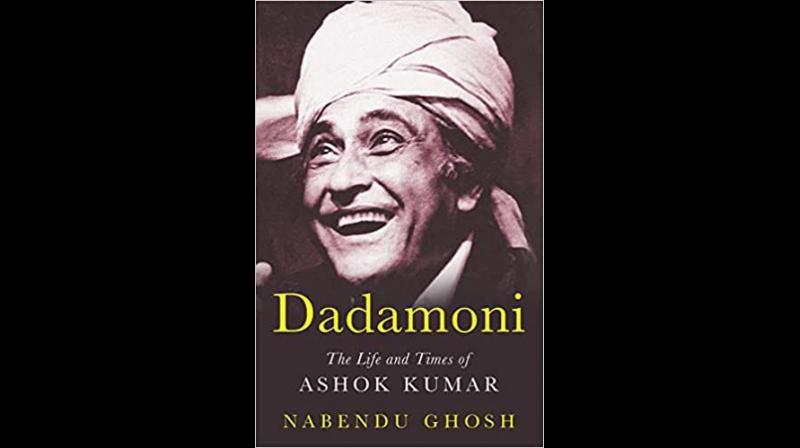 Ashok Kumar is one of the four pillars of old Hindi or Hindustani cinema, that is, from the mid-1930s to the 1970s. The other three pillars are Dilip Kumar, Dev Anand and Raj Kapoor. Of the four actors Ashok Kumar was the senior most beginning in 1936 with Achut Kannya produced by Bombay Talkies owned by his leading lady Devika Rani and her husband Himanshu Rai, trained in film making, in Germany, just before the rise of Hitler and the Nazis in 1933. The film dealing with the scourge of the caste system in India was directed by Franz Osten, a refugee from Germany and a friend of Himanshu Rai’s. Osten knew little or no Hindi. Achut Kannya turned out to be a big hit with the middle class that comprised a huge part of the paying audience.

Bombay Talkies was from the beginning modern in outlook, its owners being Western-educated, internationally traveled, intellectually aware, upper class Bengalis who understood their duty as film producers to make films that highlighted major social causes that affected their fellow Indians. The Bombay Talkies was as aware of its role as an agent of change in a society stuck as if in time and moribund social customs. In this sense a Bombay Talkies production was as socially aware, albeit, from a middle-class point-of-view, as anything produced by New Theatres, Calcutta or Prabhat Talkies, Pune. Ashok Kumar, who became a lead actor from being an assistant developing film in the laboratory, at the whim of Himanshu Rai, the boss, grew up among some very talented and educated people. The head of the camera department in the studio was the gifted Carl Joseph Wirsching, also a refugee from Germany, Gyan Mukherjee, the director of Kismet which ran for three years, was there as Saadat Hasan Manto, a scriptwriter, destined to attain immortality as an Urdu short story writer and many others. Himanshu Rai remained the most powerful influence in the life of Ashok Kumar, who helped him grow as an artist.
Ashok Kumar studied every aspect of filmmaking at Bombay Talkies, but must have been pleasantly surprised at his growing success as an actor. His mentor Himanshu Rai had told him at the very outset that he must strive to behave naturally before the camera and speak naturally as well. He learned to throw his voice and control it by himself. He also practised before a mirror to find a balance between the spoken word and the physical gesture accompanying it on screen. Assiduous study of the acting styles of Hollywood actors like Ronald Coleman, Spencer Tracy and Leslie Howard helped him to give more believable performances in Hindi films. Before him, acting in Hindi, indeed all films produced in Indian languages, were melodramatic. He passed on his secret to his Bombay Talkies protégé Dilip Kumar, aka Yusuf Khan, who was to be a great actor in the naturalistic mode.

He gave some of his most convincing performances where he was given a well- rounded character to play. Bimal Roy’s Parineeta (1953) based on Sarat Chandra Chatterjee’s Bengali novel gave him the role of Shekhar, the benefactor of Lalita, an orphaned young woman, played by a nineteen-year-old startlingly talented Meena Kumari, whom he loves dearly but does not really understand; then again, in Bimal Roy’s Bandini (1963) as Bikash Ghosh, the revolutionary who involuntarily fails Kalyani, the love of his life, brilliantly played by Nutan. He shone in good company as an actor. He gave very many memorable performances like in B. R. Chopra’s Kanoon (1960), as a troubled judge, or as late as 1972, in Kamal Amrohi’s Pakeeza, where he played Nawab Shahabuddin, an Aristocrat with a troubled conscience. One could cite many more performances that are worth remembering.

Among his many contributions to the art of acting are his performances as Indian cinema’s first anti-hero in Kismet (1943) and later in Sangram (1950) both directed by Gyan Mukherjee. His natural aptitude for comedy was seen to advantage in Bandish (1956) with Meena Kumari and Daisy Irani, and in Chalti Ka Naam Gaadi (1958) with his brothers Kishore Kumar, Anoop Kumar and Madhubala, both directed by Satyen Bose and both big hits . In Chalti Ka…, he stood up to Kishore Kumar at his zaniest and the sparkling Madhubala at her most mischievous. Late in his career he did a hilarious turn in Brij’s Victoria No. 203 (1972) with Pran, and was very funny in Basu Chatterji’s Chhotisi Baat (1975), not to forget Hrishikesh Mukherjee’s Khubsoorat (1980).
Ashok Kumar’s many talents included a formidable one for organisation. When Devika Rani left Bombay Talkies consequent to the death of Himanshu Rai, and after her marriage to the Russian artist Svetoslav Roeric in 1943, a debt of Rs.28 lakhs had accumulated, Ashok Kumar along with his colleague, the editor Savak Vacha, took over the studio and made enough low-budget successful films to pay off the debtors. That same year Ashok Kumar became a partner in a production company called Filmistan founded by his brother-in-law Sashadhar Mukherjee, Rai Bahadur Chunnilal and Gyan Mukherjee. Filmistan became a great success. Sashadhar Mukherjee in later years founded Filmalaya, an eminently successful production house in the late 1950s into the 60s. Ashok Kumar was also given the Padma Shri and the Dada Saheb Phalke award by the Government of India.
Nabendu Ghosh’s biography of Ashok Kumar, despite its hagiographic tone is also genuinely informative, perceptive and loving. One is grateful to his daughter Ratnottama Sengupta and publisher Sleeping Tiger for the re-print.