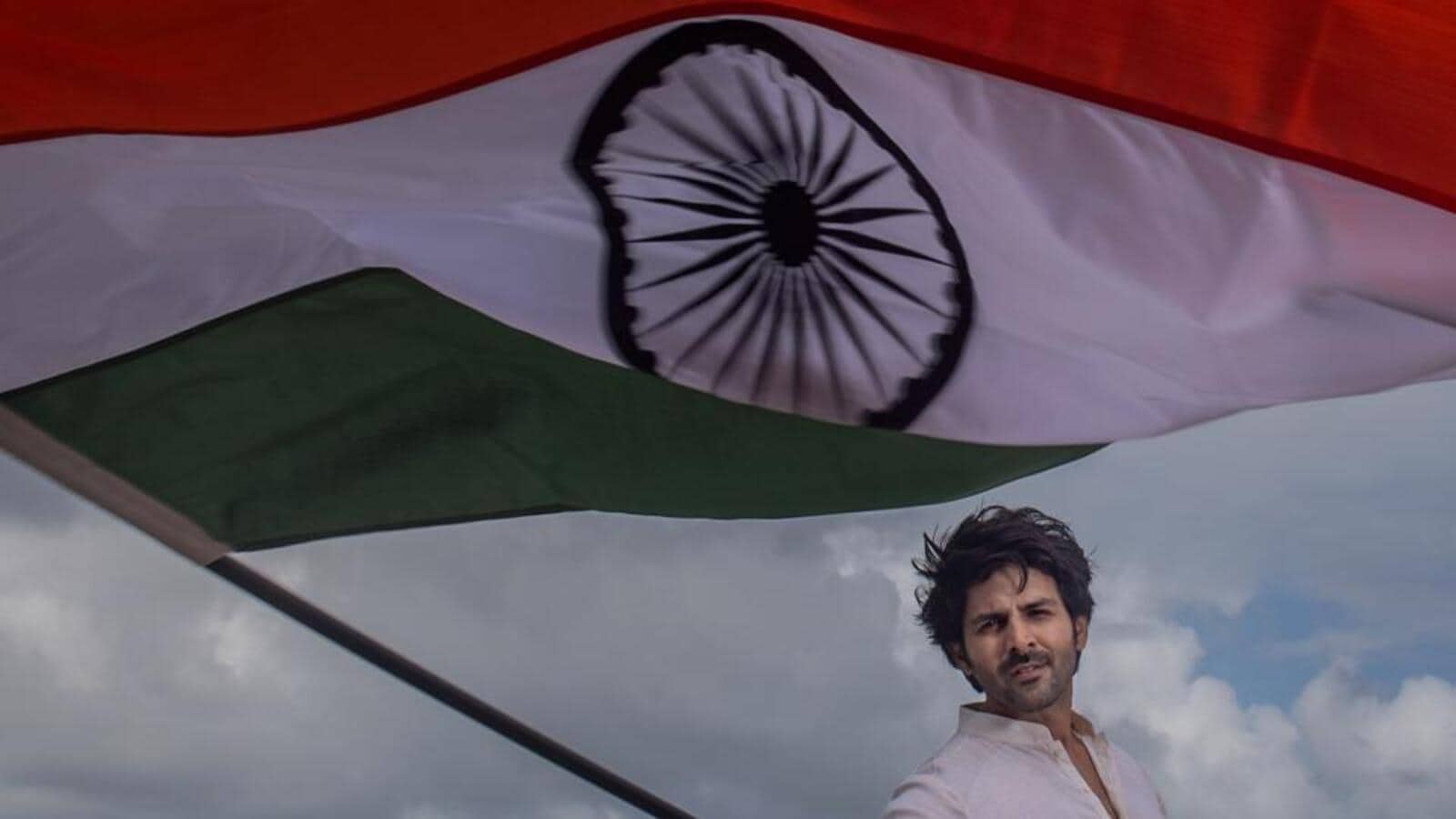 Actor Kartik Aaryan is the man of the moment, and the youth of the country hangs on to every word he says. When we take him to Juhu beach, Mumbai for this exclusive shoot, a crowd gathers in no time. But the Tricolour has all his attention!

As we celebrate the 75th Independence Day, the 31-year-old gets talking to us about freedom :

How much has the way you look at Independence Day changed? From just being another holiday in school, to now when you are grown up…

I studied at St Paul’s High School in Gwalior and my Independence Day dates back to my school days. I remember the flag hoisting ceremonies we had, participating in special programs for Independence day. I even remember waiting for laddos, listening to patriotic songs, feeling an extra amount of pride but then over the years when you learn more of the history and see its impact in your life growing up, it becomes more real. I realised how much being a part of such a wonderful diversified country is and how people serve the nation and give more than their everything for it. so the idea then shifted from a fun holiday to a deep sense of responsibility and gratitude for the ones who made it possible. The feeling today is also immense love for our Motherland – Bharat Mata… a feeling which exists everyday but gets super-special on Independence Day. A few years ago I was invited to my old school as a chief guest and I attended the flag hoisting with thousands of young kids, it was a special feeling filled with nostalgia and also with so much of the incredible love I received from the students there . It felt like life came full circle.

What do you feel the current generation wants from their country? What are the aspirations of today’s youth?

Opportunity! I feel the youth in India, ranked the highest youth population in the world, is brimming with potential, equipped with an advanced skill set and above all hardworking to the core. We’re always looking for opportunities to sore, aspiring for a better future, a better life …They are highly motivated, ambitious with a go-getter attitude. With the right opportunities there is nothing we as a Young India can’t do.

It’s our 75th Independence Day. What’s that one thing you feel we still need freedom from in today’s time?

I don’t know if we can call it as ‘freedom’ from it… but it surely needs to be erased is the pressure on kids and young minds. Right from the time a kid is in his or her school age till the time he or she teenager graduates – there are times when they are always put under pressure. Their academics, the stream they should pick up, the profession they should opt for – several times these decisions are not made by the kids but rather by their family and parents. Its really sad that a young mind who probably has all the potential to explore his or her desired field. This pressure begins from a very young age and continues for a long time. It’s really less spoken about and at times its not healthy for the mental state of the person. So just hoping that in whatever way if there could be a way to erase this problem and have our youth guided in the right direction… if their heart and mind desires for something that can shape their future.

When we talk about independence, there is a certain pressure that must come on a star like you. On social media or in public, every word you say is scrutinised. Do you feel that takes away from your independence in that respect?

I wouldn’t say social media takes away from my independence because I am still being myself on there. I don’t have to rely on anybody else to come and tell me what to do and still doing everything the way I feel like. Independence and freedom is still there. It’s definitely nothing that takes away from my independence or freedom, but yes, one must be conscious of what you say there, which I think is a normal practice for everyone that people should practice in general because whether a star or not, social media has the power to influence the people who follow you, and watch your stories and posts. So in general, I feel people should be more careful about what they say. Basically think twice before you speak out is what they say right? Like I feel like I have reached where I am because of my freedom to really show to my fans who I am, and being as real as I can be.