Kesariya To Rangi Saari, Bollywood Seems To Be Making Songs Only Designed For 30 Sec Insta Reels 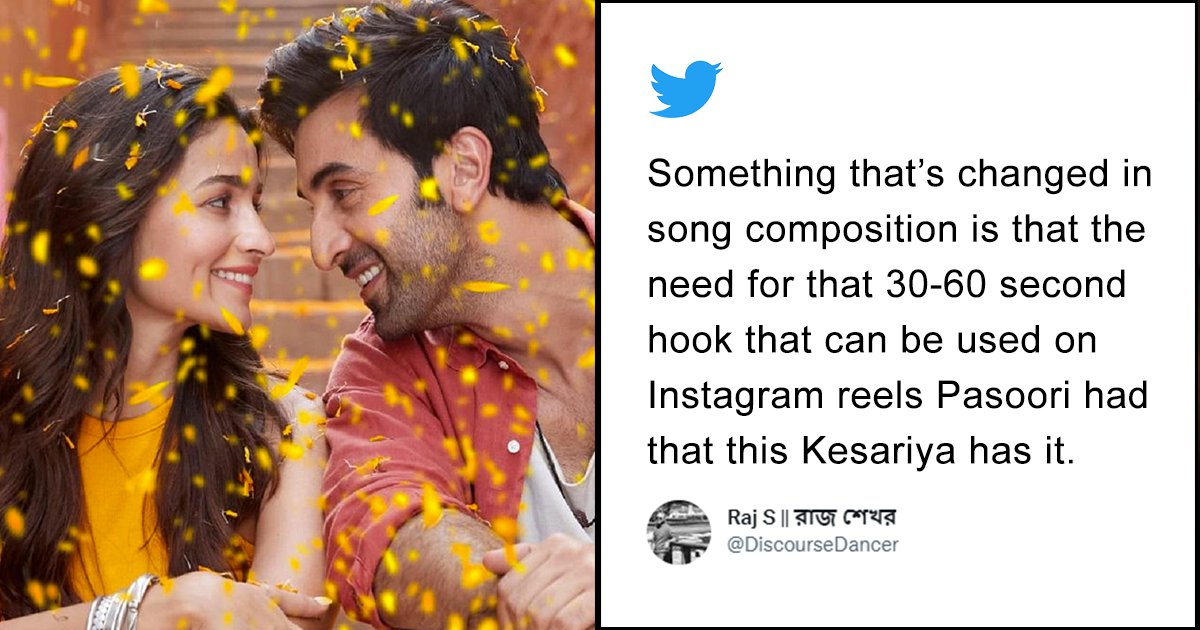 Suppose if a non-working weekend is reserved for binge-watching then we have scaled to a point in life where every non-working minute is officially designated to doom-scrolling.

Strangely, in the digital age, lazily scrolling through Instagram reels reigns more supreme than our treasured power naps— that once rescued us from the third breakdown in a day.

But, out of everything, is Bollywood capitalizing on this doom-scrolling culture?

If you have been sincerely scrolling Instagram for the past few months, Brahmastra’s long-awaited song Kesariya would be ringing in your head until this morning. The teaser dropped on April 13, 2022, and it quickly rose to the top of the Instagram Reels charts in India.

Unquestionably, the 30 seconds of the song felt like a vacation from the remake business that Bollywood is stuck knee-deep in.

The mellifluous teaser heightened the fans’ anticipation ten folds since it’s only natural to wonder— if the lyrical chorus is this good, how top-notch will the rest of the song be?

And most recently, when Kesariya’s Full song was released, it caused the high hopes to collapse like a house of cards. Be it the Laree Chouti déjà vu or the love storiyaan fiasco, the full song was synonymous with disappointment, despite the hype or perhaps because of the hype.

Yet, no matter how unimpressive the full song is, the hook of the song has made its way to a plethora of reels, making it a commercial win.

So the question that arises is, are all songs strategically made with the intention of going viral on short-form video platforms? Is it not fostering a small-effort-but-big-reward environment?

Hooking choruses have always worked but Bollywood these days is becoming notorious for making it trend-worthy while the rest of the song is a complete dud.

Remember Badshah’s popular track Jugnua trend that reelers hopped on with no clue about the rest of the song?

Perhaps the song composers are feeding us with what we want to be fed. Our dwindling attention span demands the song to give us the thrill seconds after we hit that play button.

Case in point: Ali Sethi’s Pasoori, a 4-minute-banger that broke the Internet, strikes the right nerves within 40 seconds it commences. Strangely, fans consider it as their ‘all-time go-to’ music without even ascending to Shae Gill’s part (which is where I believe the song hits for real). Hilarious times that we live in.

Does the creative freedom feel stifled to squeeze into the model of reel-ification that drives sales? Likely so.

Funnily enough, it reminds me of a personal encounter. Being a chest-thumping NFAK fan, I once played Halka Halka Saroor only for a friend to innocuously ask me, within a minute, “theek hai par ye shuru kab hoga”. It cracked me up but, in all honesty, jab tak ye mahol banayenge tab tak do aur gaane baj jayenge.

This generation primarily isn’t interested to immerse in music, we simply want to dip their toe and move on to the next. Nobody can be blamed here because signing up for an 18-minute-song isn’t practical when your break itself lasts for 15 minutes. Now, more than ever, barely anyone wants to get immersed in music, they simply want to dip their toe and get all the feelz.

Oh and not to mention the highlight of the 2020 lockdown was people making Main Tera reels of their own pictures. Self-love peaked at that time. Well, it only took me a month to figure out that chorus was a ten-second chunk of Kalank’s title track.

It is implied that a song will be a hit if it has the potential to trend on Instagram. The subscribers of the ‘smart work over hard work’ mindset won’t find this problematic yet would hesitate to apply this logic if someone favors whistle-worthy blockbusters over art films.

So which song will prove to be a bigger success? Hint: The hook of which will be pushed by your algorithm.