Nitish Kumar back in Mahagathbandhan; oath ceremony today at 2pm 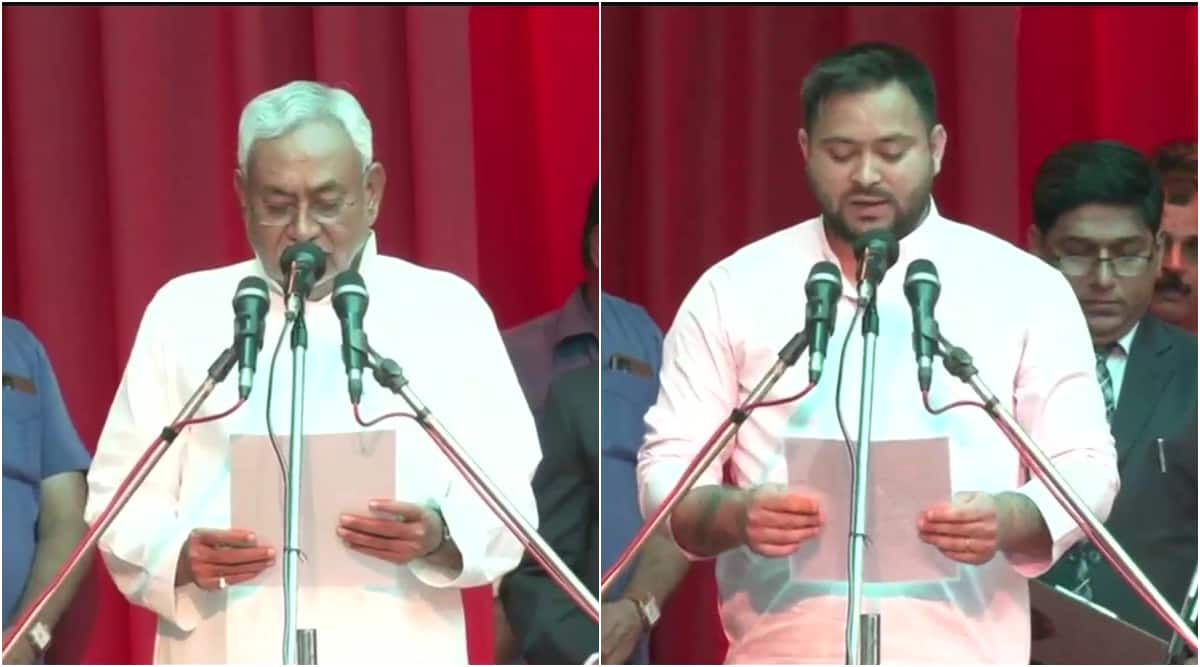 The discomfiture between the BJP and the JD(U) has been building up for the last two months. (File Photo/PTI)

The Bihar BJP core group has decided to meet on Tuesday evening to take stock of the evolving political situation in the state. Bihar BJP chief Sanjay Jaiswal is expected to chair the meeting which is likely to be attended by both deputy chief ministers, former state party presidents and other senior leaders. The BJP also held a meeting at Deputy Chief Minister Tarkishor Prasad’s residence and among those present there included party’s state unit president Sanjay Jaiswal. More than one of the prospective attendees of the JD(U) meeting denied that the party’s ties with the BJP have increased to an extent to call for a realignment. The Hindustani Awam Morcha (Secular), a constituent of the NDA, and the Congress also held meetings of their MLAs Tuesday.

Earlier in the day, leaders from the Nitish Kumar-led party had said that today’s meeting was nothing out of the ordinary. “Our party had held many such meetings of MPs and MLAs in the past. We have been told that the current meeting has been called to discuss organizational matters. Never heard about any major crisis in the NDA,” Rajya Sabha MP Ram Nath Thakur told PTI.

This morning, the JD(U) and the Opposition RJD held separate meetings of their MLAs in Patna. Meanwhile, in a tweet in Hindi, JD(U) parliamentary president Upendra Kushwaha congratulated Nitish Kumar for the “leadership of a new alliance in a new form.”

The meetings have been called following a phone conversation that Nitish reportedly had with Congress president Sonia Gandhi.

The JD(U) and RJD have of late been cosying up. There have been no attacks on the other by either side, and in a rare show of camaraderie, Nitish accompanied by Tejashwi, Leader of the Opposition, to the CM House gates after an Iftaar party.

BJP waits it out, but is nervous ‘Nitish Kumar threat serious’ this time

As its key ally JD(U) indicated parting of ways with the BJP Monday, the latter was waiting and watching. However, while many hoped that Nitish Kumar was only “posturing” for a “larger pound of flesh” in the Union Cabinet, the unpredictability of the Bihar Chief Minister has the BJP on the edge.

There is also at least one change from earlier instances of Nitish’s brinkmanship that is making the BJP nervous. A BJP leader pointed to “the changed political scenario post the arrest of a close aid of RJD supremo Lalu Prasad”, leaving the RJD more pliant.

Nitish Kumar vs BJP: How the numbers stack up in Bihar Assembly

Amid clear signs of turbulence in the BJP-JD(U) tie-up in Bihar, the RJD and JD(U) Monday called for separate meetings of their MLAs in Patna. The Hindustani Awam Morcha (Secular), a constituent of the NDA, is also holding a meeting of its MLAs.

The RJD had emerged as the single-largest party in the 2020 Assembly elections.

With the discomfiture between the BJP and the JD(U) building up for the last two months, we take a look at where the parties stand in the Assembly currently.

The 2020 Assembly polls in Bihar was a tight one with the National Democratic Alliance winning 125 seats, with BJP winning 74 of these, the Janata Dal (United) of Nitish Kumar 43, the Vikassheel Insaan Party 4 and Hindustan Awaam Party (Secular) 4 This put the NDA just above the requisite 122-majority mark needed to form the government.