Nitish likely to retain Home, keep most ministers; RJD may get Finance & Health 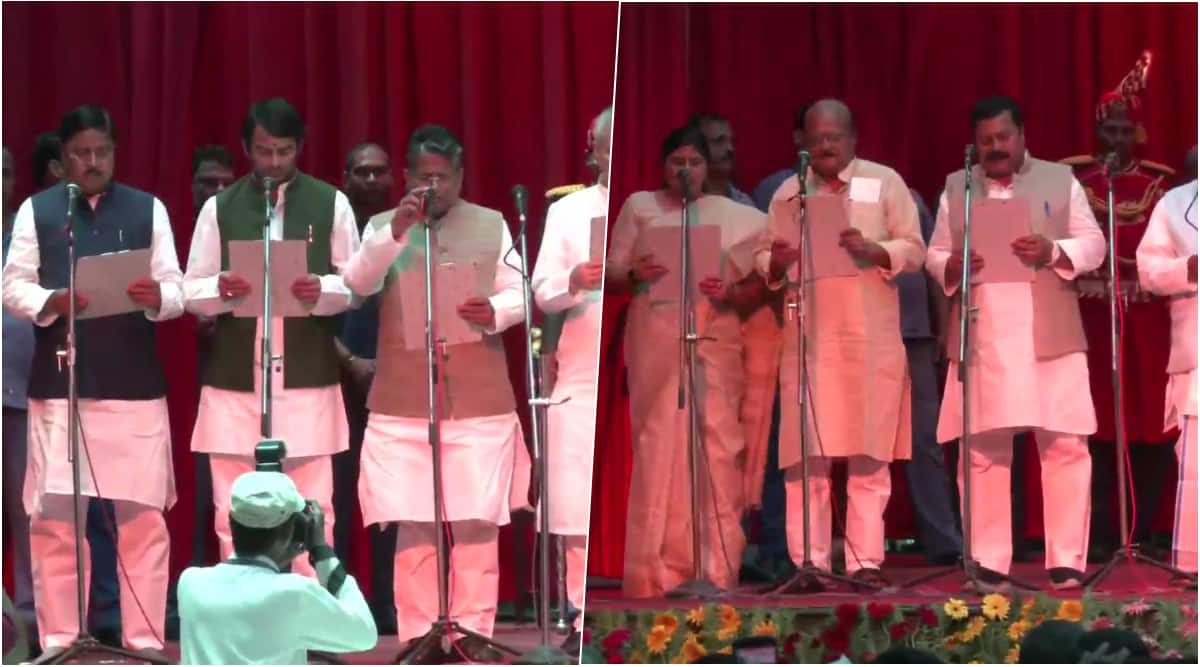 Bihar Chief Minister Nitish Kumar addresses during a function at the Gandhi Maidan on the occasion of 76th Independence Day, in Patna, Monday, Aug. 15, 2022. (PTI Photo)

The list of probable ministers from the RJD includes Tej Pratap Yadav, Surendra Yadav, Ramanand Yadav, Bhai Virendra, Lalit Yadav, Anita Devi, Kumar Sarvjeet, Alok Mehta, Mohammed Shamim, Shahnawaz Alam, Sudhakar Singh, and Samir Mahaseth or Sanjay Gupta. Though there is likely to be a dominant Yadav presence in the Cabinet from the RJD quota, the party is also trying to accommodate non-Yadav Other Backward Class (OBC) leaders and Dalits in the ministerial council.

JD(U) insiders said Sanjay Jha, the water resources minister in the previous Cabinet, was openly named in a party meeting as one of the four persons responsible for taking Nitish back to the BJP-led National Democratic Alliance in 2017. At present “ Though there is still no clarity if Jha will be retained, what can go in his favor is the key role he played in bringing Ganga water to Nalanda and Gaya”, said a JD(U) source. Sheela Mandal may have fallen from the council of ministers as she is believed to be in the former party leader RCP Singh’s camp.

Explained: The three pillars of Nitish Kumar’s political-social strategy of survival and success

As Nitish Kumar switches partners once again to remain Chief Minister of Bihar, much of the chatter has focused on his apparent ideological flexibility. But behind his remarkable success as a survivor is a brain that has carried out experiments in social repackaging and political messaging that is possibly unmatched in the history of Indian politics.

There are three social groups that Nitish has focused his political energies on — and they have over time come to constitute a social base that makes him indispensable to both the BJP and RJD in their attempts to form a government in Bihar. And Nitish has used this king-making leverage to remain king himself. Post 1990, the Scheduled Castes (SC) of Bihar were attracted towards Lalu Prasad, but were quickly disillusioned by the Yadav dominance of his government. Nitish, who had broken away to form the Samata Party along with George Fernandes in 1994, realised the need to widen his base among the SCs. With Ram Vilas Paswan firmly in control of the Paswan vote — about 5 per cent of the state’s population — Nitish sought to target the remaining 12-13 per cent, which comprised Dalit communities such as the Ravidas and Musahars, who did not have a clear political patron.

The changing colors of Nitish Kumar

With his latest somersault, JD(U) leader Nitish Kumar has again proved himself to be the consummate politician, managing to keep himself relevant and staying the face of every alliance, irrespective of the company he keeps.

At 71, he remains the only product of the JP Movement of 1974-75, besides his deputy, Sushil Kumar Modi, who remains firmly in command. An ailing Lalu Prasad has virtually ceded reins to son Tejashwi Yadav.

Ironically, having experimented with the BJP once too often, Nitish has come to believe his home lies under the larger socialist umbrella, if JD(U) sources are to be believed. A more pragmatic reason is the overwhelming presence of Narendra Modi in the BJP, which left little space for Nitish to manoeuvre. The warning came in the 2020 Assembly elections, where the JD(U), contesting in an NDA that contained the BJP and the Lok Janshakti Party (LJP) seen to have the BJP’s blessings, was reduced to nearly half of the BJP’s tally (43 compared to 74).

The Bihar Handshake: Nitish, Tejashwi and a shared purpose — taking on BJP in 2024 There’s something about Nitish Kumar and the number 7. As Chief Minister, he has been staying at 7, Circular Road, while using 1, Anne Marg, the official CM residence, as his office. Now, with Nitish severing his five-year-old alliance with the BJP and walking over to the Mahagathbandhan camp, many point out that a famous Delhi address — 7, Lok Kalyan Marg, the official residence of the Prime Minister — could be on his mind. After all, as he left the NDA, Nitish sent out a political dare, couched as prophesy, to the current occupant of 7, Lok Kalyan: “Jo 2014 me aaye the, 2024 me aayenge kya (the one who came to power in 2014). , would he also return in 2014)?” Though there has been much talk about Nitish’s growing discomfort with an “overbearing” BJP, the stark message to have emerged out of Nitish’s latest U-turn is his rekindled national ambition. Though he hasn’t spoken openly about his PM hopes and continues to talk about “serving” Bihar, soon after taking oath as Chief Minister for a record eighth time, Nitish had urged all Opposition to start preparing for the 2024 Lok Sabha elections. JD(U) sources he may soon start touring other states to explore the chances of a broader national hint coalition to take on the BJP in the 2024 elections.