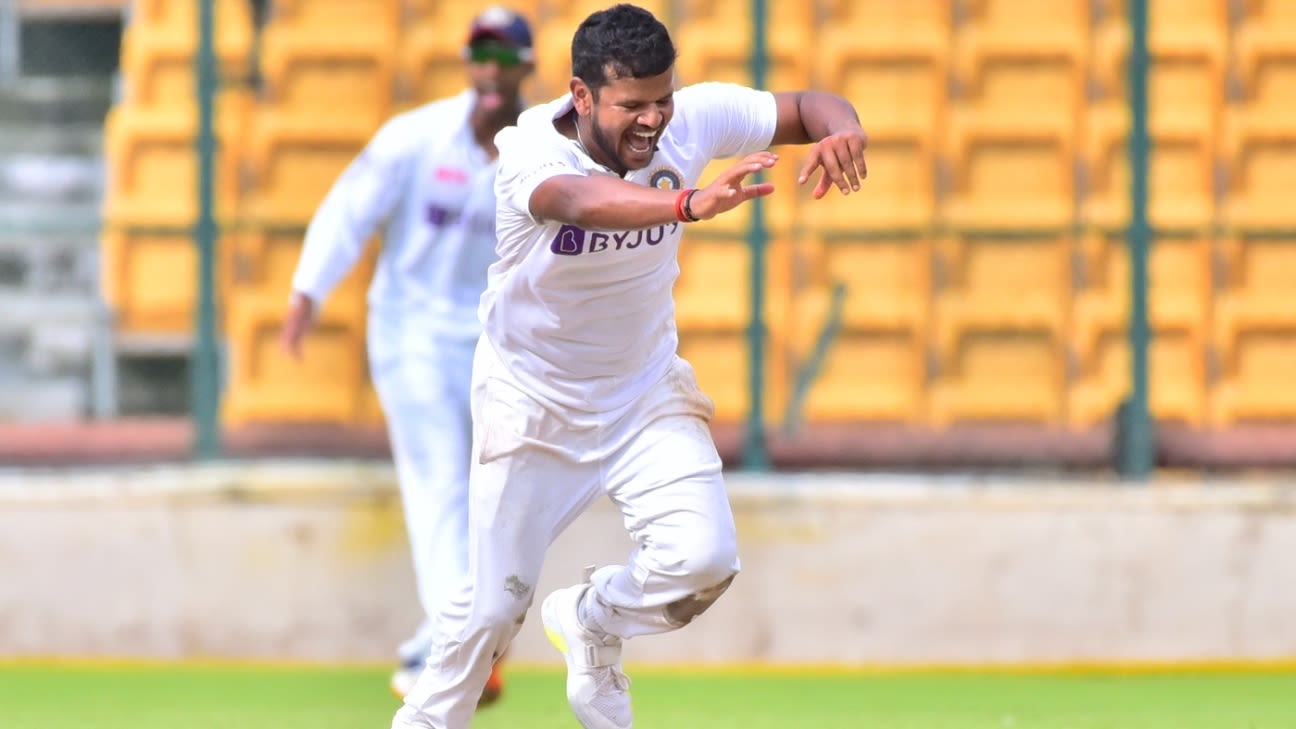 Saurabh Kumar’s 5 for 103 trumped Joe Carter’s resilient century as India A beat New Zealand A by 113 runs on a see-sawing final day of the third unofficial Test in Bengaluru to seal the series 1-0.

With New Zealand A chasing an imposing 416, the match, for the longest time, seemed to be heading for a draw with Carter, Mark Chapman bowl and Dane Cleaver doing their best to keep theers at bay. However, they faltered in the last session against Saurabh’s guile and accuracy to be bowled out for 302, just 40 minutes before the scheduled close of play.

After India A opted to bat, Gaikwad was fluent from the get-go on the first day. He came in at the fall of Priyank Panchal’s wicket, with the team’s score on 40, and saw the hosts slip to 111 for 4 losing Abhimanyu Easwaran, Patidar and Sarfaraz Khan on the way. But, he held his end up and added 134 for the fifth wicket with Upendra Yadav.

Gaikwad was particularly assertive, scoring 12 fours and two sixes during his 127-ball 108 – his fifth first-class century. Playing his first match of the series, Upendra brought up his fourth first-class fifty, finishing with 76. However, another collapse ensued once Gaikwad fell with India A at 245 for 5. They lost their last six wickets for only 48 runs to be bowled out for 293.

On a surface that offered a bit of assistance for the bowlers, Shardul Thakur and Mukesh Kumar were relentless with their lengths on the second morning. Carter survived a close lbw shout early in his innings but failed to capitalise, falling lbw to Shardul for 8 in the seventh over.

Mukesh then sent back Rachin Ravindra and Robert O’Donnell, reducing New Zealand A to 28 for 3. Cleaver provided a bit of resistance but Rahul Chahar’s twin strikes had them reeling at 99 for 5, still 194 adrift of India A’s first-innings total .

That is when the two Auckland boys Chapman and Sean Solia decided to step up. They took the aggressive route, with Chapman, in particular, unfurling an array of sweeps and reverse sweeps. Sean Solia too looked untroubled with the duo adding 114 for the sixth wicket, either side of the tea break.

A rush of blood, however, brought about Chapman’s undoing and derailed New Zealand A’s innings. Saurabh hung one back seeing the left-hander step out of his crease, and had him holing out to Patidar at long-on for 92. Solia departed soon after for 54 and the lower order did not offer much resistance with New Zealand A getting dismissed for 237 in 71.2 overs, giving India A a lead of 56.

Joe Carter made India A toil•Mallikarjuna/KSCA

The hosts lost Easwaran late on day two before captain Panchal and Gaikwad saw out the final session.

The third day was all about the batters grinding the opposition out of the contest. Gaikwad carried on from his first-innings exploits with a solid 94 and was backed up by Panchal and Patidar.

Resuming on 40 for 1, with a lead of 96, both Gaikwad and Panchal found the boundaries at regular intervals. The former reached his fifty off 76 balls before India A lost Panchal at the stroke of lunch to Joe Walker.

Patidar then came out after the break and immediately took the attack to the opposition. He galloped to his fifty off 47 balls, much to the delight of the handful of spectators who were quite vocal with their RCB chants. At the other end, Gaikwad looked set for a second successive ton but threw his wicket away, looking to loft walker over mid-off only to be caught superbly by Chapman.

Patidar, though, carried on, reaching his tenth first-class century. He added a 108-run stand for the fourth wicket with Sarfaraz, who was his usual busy self during his 74-ball 63.

The hosts then lost a few quick wickets before declaring on 359 for 7. Saurabh got into the act in the second innings as well trapping Ravindra in front for 12 just before stumps.

New Zealand A needed a further 396 runs to force an improbable win on the final day. They lost nightwatcher Walker early but Carter and Cleaver held their own before Saurabh struck again, pinning Cleaver lbw for 44.

Carter and Chapman then put on an 82-run partnership to take New Zealand A into lunch unscathed. The pitch didn’t seem to have broken up enough to offer a lot of turn. It did not help that Rahul Chahar was forced to leave the field inside the first hour of play. He did not return for the rest of the day, but Panchal later suggested that his injury wasn’t serious.

Carter, meanwhile, remained defiant. Barring a tough dropped chance at a wide first slip from Gaikwad and a close run-out chance, he was largely untroubled. However, introducing Sarfaraz into the attack did the trick for Panchal. The part-time legspinner picked two quick wickets before Saurabh rattled the visitors with two of his own.

Carter reached his century with a straight hit down to long-on but continued to lose wickets at the other end and was the second-last man to fall. Saurabh closed out the match and the series trapping Jacob Duffy lbw.

Ashish Pant is a sub-editor with ESPNcricinfo