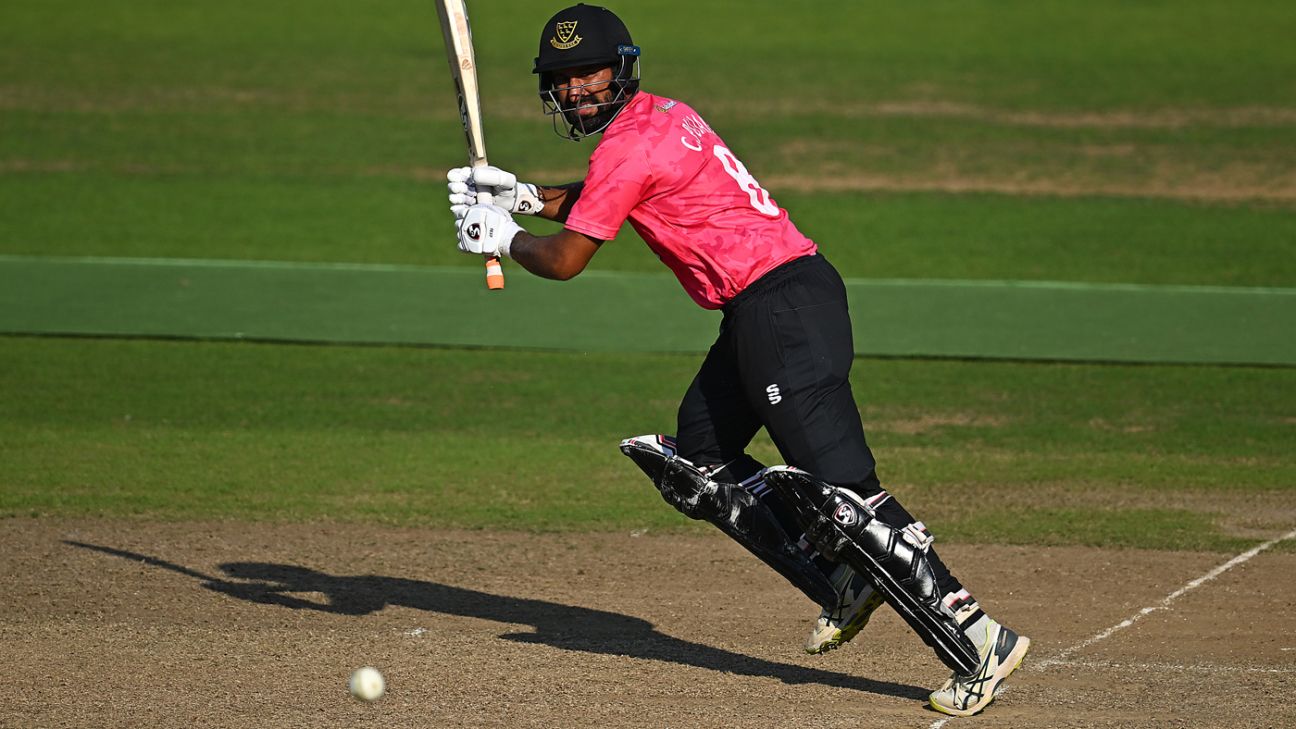 Even the most one-sided match involves two teams. Look at the scorecard for this game and surely the narrative is plain. A world-class batsman and one of Sussex’s brightest young cricketers amass a total that overwhelms opponents, some of whom are barely known outside the Surrey Championship. All this is true. Cheteshwar Pujara’s 174 ravaged Surrey’s attack in a fashion unknown to those who have only seen him solder an Indian innings together in a Test match. And Ari Karvelas’s four wickets with a new white ball made certain the result of this match was known long before Ali Orr’s running catch on the Palmeira Avenue side of the ground satisfied the fact-checkers. More than 18 overs were left in the game when that last wicket fell and the informal games now taking place on the Hove outfield have an air of celebration about them, as though suggesting that if Surrey’s cricketers couldn’t provide more entertainment, the home spectators will make their own.
But let us look more closely. No county’s staff has been ransacked for players quite as brutally as Surrey’s. At the current count – things may have altered in the last half-hour – 14 players had been called up for The Hundred. But one can argue that the county’s supporters have been blessed by such pillaging. A second championship in four years is simmering gently and instead of watching players they know well, they have had the chance to see cricketers hardly any of us outside the county knew at all before this competition began. Six of Ben Geddes’ team have made their List A debuts in the past fortnight, nine of this team were under 24, and they are being coached by Alec Stewart, the “gaffer” having found the Oval Invincibles’ call utterly resistible.

Many people felt similarly at Hove this Sunday morning when the white roofs in Cow Corner were whipped to a point like meringues and there was a silver shimmer on the Channel’s waves as though the sea was suddenly molten. And at the Cromwell Road End there were – wouldn’t you know it? – those blue and white deckchairs, rows of the rass and most of them occupied by supporters who have kept the faith through fat and lean summers at Hove. One or two may have been here on the July morning in 1966 when a young lad called Greig made his debut against Cambridge University; some were certainly around when that first title arrived in 2003. Loyalties pledged early are often pledged deep.

Such fidelity was rewarded abundantly on a day when Surrey’s young players discovered that their education will frequently be merciless. And the truth, though no one can acknowledge it, is that some of them will not establish themselves as professional cricketers. So Stewart will have been watching carefully in the first half of today’s cricket as his bowlers and fielders were savaged by Tom Clark and Pujara in their 205-run third-wicket stand, the highest for Sussex against Surrey in List A cricket. Who stood up? Who willed? Who kept their discipline in the field as Pujara turned up the heat in the last third of the innings, going from 100 to 150 in 20 balls before he skied Connor McKerr and was eventually caught by Geddes at mid-off for his List A best score of 174 off 131 balls. When he was out, the Surrey cricketers he had terrorised queued up to shake his hand. The respect was obvious but maybe they thought something might rub off.

Yet the morning had begun so well for Surrey. Orr was caught at the wicket by Josh Blake off Tom Lawes in the third over the day and Harrison Ward followed four balls later, bowled off the inside edge for five by Matt Dunn. Thereafter, though, the morning and early afternoon belonged to Sussex, first to Clark, who timed the ball beautifully from the moment he drove Dunn through backward point in the sixth over of the morning and reached his maiden List A century off 104 balls with a single off Amar Virdi.

None of this will have pleased the Surrey supporters who boarded the 8.14 from Victoria but they were fully aware that their green team might have a hard day. But they supported them anyway and one rejoiced in their faithfulness. In truth, no member of Geddes’ attack will look back on Sussex’s innings with much delight for there were times when Pujara had no truck with any bowler. There were three successive fours off McKerr, four on the trot off Yousef Majid and five sixes, a couple of which sailed into the prosecco parties in Cow Corner.

But if this Royal London Cup campaign is giving Surrey’s young players some sense of the granite reality of their brutal trade, it is also offering 28-year-old Aristides Karvelas further opportunities to show what he might achieve for Sussex if his month’s trial is converted into a full contract. Karvelas bowls at a brisk fast-medium and if the first few strides of his run-up suggest the lumber of Angus Fraser, the end product is totally more athletic. Low bounce may have helped him to take his first wicket when he bowled Geddes but his other successes were mostly his own work, although Nico Reifer cannot look back with much pleasure on the limp, hanging bat that edged a catch to Tom Alsop.

Karvelas’s first seven overs settled Surrey’s hash. Ryan Patel, one of the few Surrey’s players with proper first-team experience, played well for his 65 and the innings lasted long enough to allow Lawes to pick up his maiden Surrey fifty. The game was long gone by then, though, and Delray Rawlins’ three cheap wickets merely allowed Surrey’s supporters to enjoy a pint of Harvey’s in Hope Place or catch an early train back to the city. And at least they, like their Sussex counterparts, had been watching cricketers who represented a geographical area in which most of them had learned their cricket and to which they owed allegiance. It is worth treasuring such things in a month when the plastic creations of marketing men are blindly worshiped and there are vandals at the gates of the city.