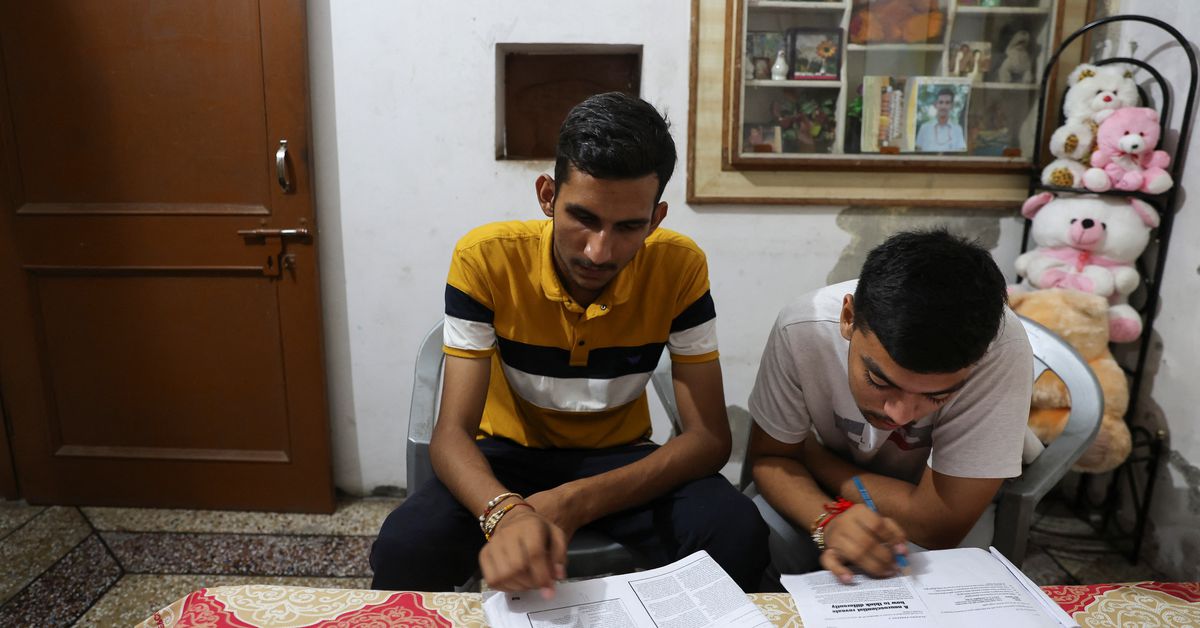 AMBALA/SYDNEY/TORONTO Sept 7 (Reuters) – When 19-year-old Sachin failed to score the grades he needed to get into a good Indian college, his father, a small shopkeeper, took a loan and dug deep into the family savings to help him secure a Canadian student visa.

The 2 million rupees ($25,035) they scraped together covered the fees for English language tuition provided by Western Overseas, one of dozens of visa consultancies in Ambala, about 250km from of New Delhi, that promise better lives through study overseas.

“My dream is to settle abroad as I see no future in India,” said Sachin, who uses only a single name. He now plans to fly to Canada where he hopes to complete a two-year diploma in business management and eventually secure a longer work visa.

While middle-class Indians have for seeking better prospects in other decades, worsening economic conditions are now driving families from poorer rural areas like Sachin’s to make big investments to set up new lives for their children overseas.

Sachin says his two friends now in Canada earn about C$1,200 ($918) a month through part-time work while studying for diplomas.

With many countries now lifting COVID restrictions, the number of Indian students heading to places like the United States, Canada, Australia, UK, Ireland and New Zealand was almost one million in early 2022, roughly doubling from pre-pandemic levels, according to government and industry estimates.

In Sydney, Catriona Jackson, chief executive of Universities Australia, said more than 76,000 Indian students were now pursuing education in Australia, which is expected to accelerate after both countries signed a bilateral trade pact this year.

Many are applying for short courses in Canada and Australia driven by bleak job prospects at home and as Western governments loosen immigration requirements to fill university and job vacancies.

The overseas education market is estimated to more than double to $80 billion by 2024 from about $30 billion, according to a 2021 report from Red Seer, a consultancy, as global incomes and middle-class aspirations rise.

The increasing cost of private education and falling job opportunities in the public sector and manufacturing in India have forced thousands of families to mortgage properties or take bank loans for overseas education, visa consultants said.

Not even a 7% decline in the Indian rupee this year has deterred families from forking out the fees.

The company plans to open 27 offices in small towns across India this year, encouraged by a more than 90% rise in enrolments after two years of the pandemic, he said.

Several foreign universities and their local partners are organizing education fairs at costly five-star hotels and through virtual sessions in small towns to woo students.

At one such event, over 500 students recently gathered to explore opportunities with over 40 universities from Australia and Canada at a luxury hotel in Chandigarh, about 40 km from Ambala.

Gagandeep Singh, a small businessman from nearby Dera Bassi town, came with his daughter, who has received offers from some Australian universities.

“I have zeroed in on the University of Canberra, from where my sister has done Masters in Pharmacy,” said Jashandeep Kaur, Singh’s daughter, citing women’s safety and career prospects as her main considerations.

“We publish our success stories on Facebook and other platforms,” ​​said Bhupesh Sharma, marketing head of Western Overseas, which has expanded to nine major cities in northern India and has sent nearly a thousand students overseas.

“We aim to send about 5,000 students abroad this year,” said Pradeep Baliyan, its founder, adding they had also opened branches in Australia and Canada offering job placement services.

With over 300 million students in school and growing numbers seeking higher education, India is struggling to provide enough college spots and jobs for its young.

Prospects for women are particularlybleak, with a participation rate just 25%, the lowest among the major. That, coupled with the elimination of millions of salaried jobs in the last few years, has driven many Indians out.

In particular, the continued absence of Chinese students, with Beijing’s strict zero-COVID border policies still in place, has made Indian students even more important and intensified competition in the global education sector for their fees.

“The ease of securing permanent residency has become a big draw for Indian students rushing to Canada,” Rahul Oswal, the founder of consultancy Wisdom Overseas, said.

Compared with the UK and the United States, Canada’s post-graduate work and residency programs are much more flexible, he added.

Canadian universities are tying up with international consultancies such as ApplyBoard and IDP to tap the booming hint for foreign education in India’s India.

“We have a partnership with universities on one hand and on the other, tied up with local immigration services in India,” said David Tubbs, director of marketing communications at ApplyBoard, which runs an online platform for international student recruitment.

These agencies host about eight to 10 fairs a year including one large conference for the busy September intake and one in May, he said. A recent recruiters workshop in New Delhi drew more than 1,100 people.

Despite the promises, the passage to a new life in the West is neither easy nor guaranteed.

Many visas are currently stuck in limbo in places like Australia as immigration officials struggle to clear a backlog of applications made during the pandemic. read more

The costs of studying and living in countries like Canada, Australia and the United States are also extremely high for lower-income Indians.

“It is a huge amount, paying thrice the amount that a domestic student pay is a major problem we face, especially when it gets converted into Indian currency,” said Nitika Mishra, a student studying broadcasting at Fanshawe College in London, Ontario, said .

Yet even with the rupee around record lows, it’s a risk many Indians remain willing to take.

Every year, Ambala, a British colonial-era army cantonment, has typically drawn hundreds of youth into the military with the prospect of lifetime employment.

Recent amendments to India’s armed forces recruitment programme, however, have slashed benefits and tenure, downgrading one of the few avenues for social mobility in the country of 1.4 billion.

That triggered violent protests in some places in June and has forced thousands to reconsider their career paths. read more

“I prepared for two years, and had appeared for a written test to join the army. But now, I see no incentive to join,” said Vijay Chauhan, 18, taking English language classes at Western Overseas, where Sachin also did his visa preparation.

“There is no option but to quit India.”