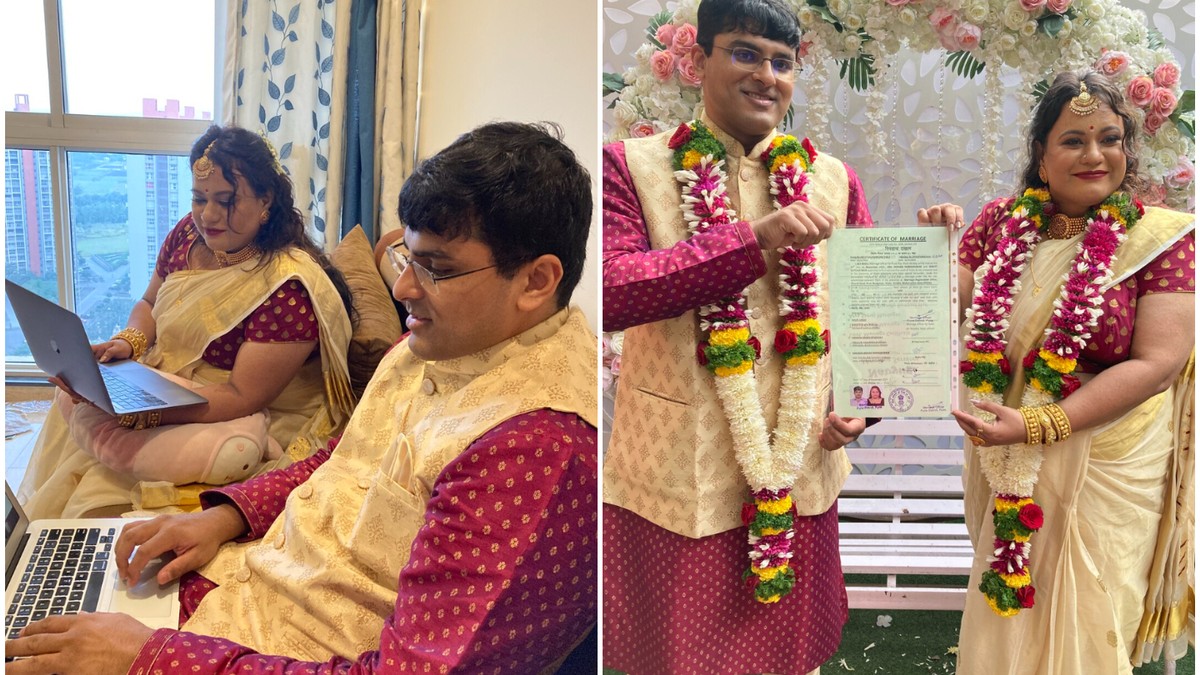 They unknowingly crossed paths many times in the past, but it was when Anil Narasipuram slid into Shruti Nair’s DMs that their fates jigsawed into place. As India braced for its first national lockdown in March of 2020, a Twitter romance blossomed between the two. Five months in, a Justin Bieber serenade and a few cheeky hints later, Narasipuram proposed at Nair’s parents’ house. She said yes.

The couple got married on Nov. 15 and now reside in the Indian tech city of Pune. But their nuptials went viral just recently. The reason? As the Indian government went from considering banning some cryptocurrencies to announcing a 30 percent tax on all cryptocurrencies, the couple’s not-so-traditional Indian wedding came into focus. The two had an intimate digital ceremony by blockchain.

“The record of our wedding is permanent, immutable and public. The blockchain ledger is tamper-proof. No one in the world can change the fact that it is recorded on the blockchain, which is a sign of our commitment to each other. [It] is a very powerful statement about our marriage itself,” Narasipuram told VICE World News.

The ceremony shows that while the government is still stumbling through figuring out how to regulate digital currencies in India, online transactions are already transforming India’s most sacred contracts: Marriage.

A blockchain is a shared database that functions as a digital ledger or record for online transactions. Cryptocurrency transactions on a blockchain are permanently recorded and accessible to the public. NFTs are unique digital collectibles that can be traded, bought or sold. They can be used to represent physical assets such as artwork, music and real estate. In Narasipuram and Nair’s case, it represented the couple’s vows and rings. “We can think of the NFT as a digital ring or as a metaphor,” said Narasipuram.

“The best part about it was that it was very personalized. It was about us and what we are looking forward to in our future. We were able to make it about our love and our story, which we were able to capture in the blockchain wedding,” Nair told VICE World News.

Prior to the ceremony, the couple officially registered their marriage in a courthouse. Still decked out in their traditional matrimonial attire, the couple opened up their digital wallets on their laptops while their family and friends attended the 15-minute ceremony via Google Meet.

Narasipuram’s cousin Anoop Pakki officiated the wedding as their digital priest and created the NFT ahead of time under the name of “Ekatvam”, which means “oneness” in Sanskrit. Pakki blessed the couple as they read out their vows, and then transferred the token to the couple who exchanged it in their digital wallets. Pakki then pronounced them as married under “the power vested [in him] by Ethereum.”

“My inspiration for doing a blockchain wedding came from a belief in the potential of blockchain. Having been in the space, I really find it to be a truly new paradigm in the way we think of trust online,” Narasipuram told VICE World News. “I was interested in seeing how we can apply this technology, and this seemed like a perfect fit. My then wife-to-be was willing to oblige and happy to participate in my crazy ideas.”

In recent years, blockchain weddings have started gaining traction around the world. In 2014, a couple recorded the first blockchain marriage, which took place using a bitcoin ATM in Disney World Florida. In April of 2021, two employees of the US-based cryptocurrency platform Coinbase exchanged NFT rings as part of a traditional Jewish wedding ceremony.

The trend is still relatively fresh in India. On Feb 6. a couple in the state of Tamil Nadu held the country’s first Hogwarts-themed metaverse wedding reception.

The novelty of Narasipuram and Nair’s wedding has prompted both confusion and support from their loved ones.

“My mother is still trying to wrap her head around what happened. [My family] is not from the world of crypto or blockchain so making them understand is a little harder and we are still trying, but they are happy,” said Nair.

Online reactions to the couple’s wedding have ranged from full-fledged excitement to accusations of altering the nature of traditional Indian weddings.

“It was a mixed bag of reactions. Some people were not happy because they believed that we were trying to replace traditional weddings with this digital wedding, which is not the case. Some questioned the legitimacy of the wedding,” said Nair.

“Some had some witty comments like, ‘Will you have your kids on blockchain? Will you mint your kids?’ It was funny. It’s always hard for society to accept new things, but you never know – it might become a popular thing in the future.”