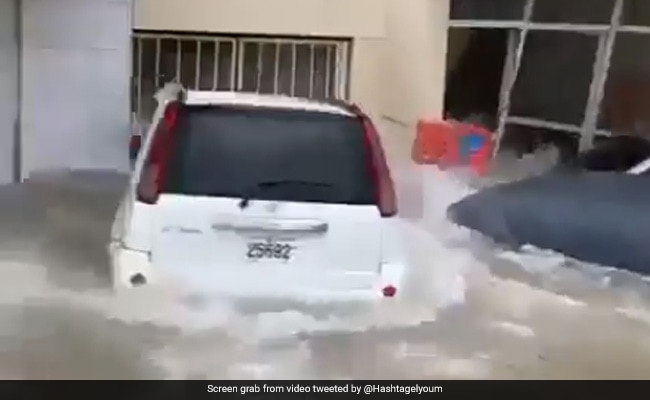 The flood in UAE was caused by heavy rain on Thursday.

In a rare occurrence, the United Arab Emirates (UAE) was hit by heavy rain on Thursday, resulting in flooding in many areas. Several videos surfaced on social media that showed people being rescued from Sharjah and Fujairah by rescuers. The two cities are badly affected – particularly Fujairah due to its mountainous terrain and valleys. People living in Dubai and Abu Dhabi reported less rain. Many people were seen taking shelters in hotels and other places to escape the unusual summer deluge.

Visuals on Twitter show cars parked on the streets of Fujairah completely submerged under water, which is seen entering already empty shops in Kalba market.

Another video shows roads at the entrance of the city badly damaged due to flooding. Cars are seen driving on pothole-filled road with asphalt coming off on many stretches.

Entrance to the Emirates of Fujairah, next to the flagpole.
The flood caused a lot of damage#UAE#EmiratesRain#Fujairah#UAE#Context#rain_uae#fujairah#UAE_Yemen#hwhdripruize#Flood#FloodSituationpic.twitter.com/n1qm4AZlIc

A view near Fujairah airport in the emirate after yesterday’s floods.
Pray to Allah to protect everyone’s life and property.#UAE#EmiratesRain#Fujairah#UAE#Context#rain_uae#fujairah#UAE_Yemenpic.twitter.com/0OikOzxmH9

According to Khaleej Times, the downpour resulted in flash floods in the eastern parts of the UAE damaging houses and washing away vehicles. Military vehicles were to rescue people from the affected areas. The emirate’s weather department has already issued a red alert in view of “hazardous weather events”. It said that cloudy conditions will persist over the next few days, adding that convective clouds may cause rains to fall “eastward and may extend over some internal and southern areas”.

The National said in a report that nearly 900 people were rescued by emergency workers. It further said that 3,897 people have been placed in temporary shelter in Sharjah and Fujairah and will remain there until their homes are deemed safe for them to return.

The National Center of Meteorology (NCM) said climate change is responsible for the increased frequency of heavy rains in the Emirates.

“Global warming and climate change are possibly one of the reasons responsible for the increase in the frequency of rains in the UAE. England has recorded the highest temperature ever registered recently amid a heatwave that has walloped parts of Europe. So, climate change is evident Another factor (for rain in the UAE) is the El Nino and La Nina phenomena are climate patterns that can affect weather worldwide,” the agency said in a statement, according to Khaleej Times.

The UAE Cabinet has directed all the federal departments to make arrangements, while the Ministry of Human Resources and Emiratisation (MOHRE) issued the same notice to private sector establishments.