With Samsung predicting that 50% of their premium smartphones will be foldables by 2025, will Apple step in to challenge them? 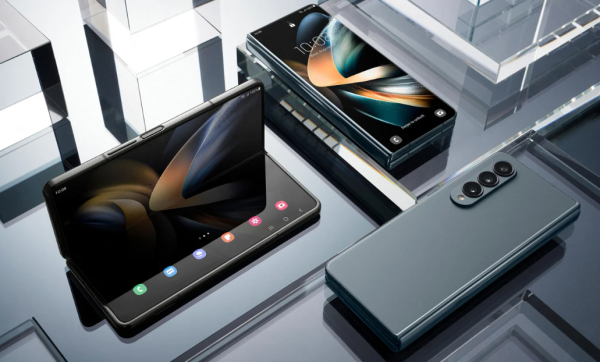 There was a rather big build up to Samsung’s Unpacked Event last week. The hype, however, didn’t quite materialize when it came to their next-gen Foldables. Though like Apple’s iPhone, each generation of foldable device presents fans with a series of nice refinements as Engadget’s Cherlynn Low presents in her video review.

In the big picture, foldable shipments remain a dot on the screen of a smartphone shipments chart. In 2021, foldables accounted for a mere 9 million unit shipments between Samsung, Xiaomi, Oppo, Huawei, Motorola (flip) and others. Counterpoint is forecasting 16 million units to be shipped in 2022 and 26 million by the end of 2023. Of course that remains a drop in the bucket compared to non-foldable smartphones.

The president of Samsung Electronics’ MX Business, Roh Tae-moon believes that Samsung willl take the lion’s share of the market this year with 10 million units. Roh revealed in late July that 70% of foldable sales weren’t their big Z Fold, but rather their flip series.

While Apple’s premium iPhones increased in shipments last year by 5%, Samsung’s premium smartphones dropped by 3%, according to Omidia, noted in a report last week by The Korea Herald.

Samsung’s Roh told the press last week that By 2025, foldable items will take up more than 50 percent of Samsung’s total premium smartphone shipments. Foldables will become the new standard of smartphones.” It’s the latter part of that statement that struck me as being s very bold prediction.

Technically speaking, Samsung is working on another form factor that falls into the foldable form factor category. I’ve referred to it many times as a “scrollable’ form factor which is also known as a “rollable” design. Our Patently Mobile IP blog has covered many Samsung patents on this form factor going back to 2015 (01, 02, 03). , 04, 05, 06 and more).

On Saturday, the popular ‘Ice Universe’ tweeted about Samsung’s upcoming Rollable devices as presented below.

With Samsung declaring that half of their premium smartphones will be foldables of one kind or another by 2025, you have to wonder when, or even if, Apple may want to enter this market segment.

With Samsung admitting that 70% of their foldables are flip-styled devices, we know that Apple has a few specific patents for that form factor like this one that goes back to 2016.

Patently Apple has covered 76 foldable, scrollable/rollable patents to date that you could review in our special archive. It’s just a fact that Apple is basically ready, patent wise, to go in any foldable device direction it so chooses to keep competition at bay.

For smartphones, a flip design may be the most appealing to some. A larger iPhone design, like a Z Fold design may or may not appeal to Apple if they think that a foldable iPad would be the more radical yet practical form factor.

Such a form factor could easily double as a hybrid notebook, a knockout portable gaming device and a mega portable entertainment device for Apple TV+ content. Apple revealed a foldable iPad patent to double as a laptop back in March 2021.

Until the market share of foldable phones hits the 10 to 20% mark of the smartphone market and begins to challenge Apple’s premium space dominance, it’s difficult to see Apple pursuing this segment in the short term when their next big thing will be to push their Mixed Reality Headset(s).

As far as rumors go, famed Apple analyst Ming-Chi Kuo has changed his predictions about a foldable iPhone from 2024 to 2025.

At the end of the day, Apple is likely waiting for the right set of technologies before bringing a foldable to market so that it could truly deliver an exciting form factor that their customer base will actually shell out big bucks for. Today, few consumers really want an experimental form factor for $1800 and the current market share statistics prove that out.

While Samsung has a huge lead on Apple for foldables, until it challenges Apple’s premium iPhone business, Apple will continue to tune out Samsung’s marketing until the design they’re preparing for the noise is ready to rock the market.