“You Chose To Give Up High Heels” 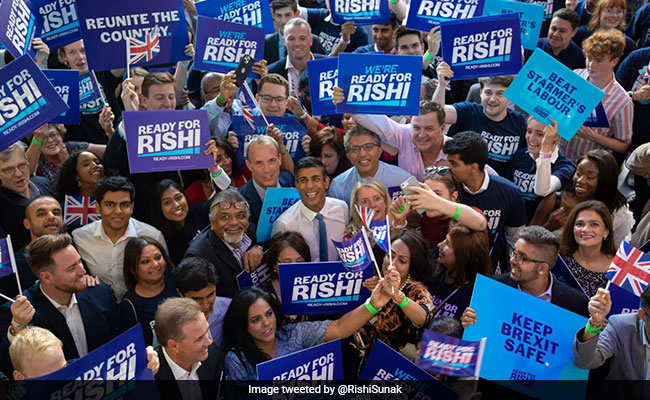 The winner is set to be announced on Monday.

Rishi Sunak struck a personal note in the final hustings event before the election for a new Conservative Party leader and British Prime Minister conclusions, as he thanked his parents and wife Akshata Murty for their support.

Addressing a teeming concert venue at Wembley in London on Wednesday night, the Indian-origin former Chancellor could have been mistaken for a rockstar amid the loud cheers and screams of “Rishi, Rishi”.

Given the sharp contrast between his booming welcome and that of his rival, Foreign Secretary Liz Truss, it was clear that at least for this audience Sunak was the winning candidate in the race to succeed Boris Johnson.

“This final hustings is special for me because the two people who inspired me to enter public service are actually here tonight – my mum and dad,” opened Sunak, as the cameras turned to the front row where his general practitioner father Yashvir and pharmacist mother Usha were seated with his wife Akshata.

“It was their example of service and what they did for people that inspired me to enter politics. Mum, dad thank you for always sacrificing and striving to provide a better life for your kids than you had. And, thank you for teaching me that With hard work and belief and the love of your family there is no limit to what someone can achieve in our great country,” he said, to applause and cheers from the crowd.

Turning to his “incredible, loving, kind wife”, the daughter of Infosys co-founder Narayana Murthy and author Sudha Murty, the 42-year-old Tory MP for Richmond in Yorkshire referenced their love story as students at Stanford University in the US .

“You know what you mean to me, and I am incredibly grateful that 18 years ago you chose to give up your high heels and take a chance on the short kid with a backpack,” he said.

The event saw both finalists set out their vision on tackling the cost-of-living crisis, fighting crime, taxation and immigration reforms and foreign policy priorities one last time in an attempt to convince any remaining undecided Tory members yet to vote before the poll closes on Friday evening. It was followed by a question-and-answer round during which they fielded questions from among the nearly 6,000-strong audience of voters and political enthusiasts.

“The greatest sacrifice I have made is that I have been an appalling husband and father for the past couple of years, it’s as simple as that,” Sunak replied to a question about his greatest sacrifice to be in the running to become the UK’s ” first non-white Prime Minister”.

“That is something that is really hard for me because I love my kids to bits, I love my wife to bits and unfortunately, I have not been able to be as present in their lives at all in the past few years as I would have liked to have been,” he said.

“But that’s because I believe it’s an enormous privilege to have these jobs. I care passionately about our country and think I can offer something that will benefit why millions of people, that’s I do it and I am really blessed to have their support as I do,” he added.

The London event marked the 12th and final event in the Tory leadership election race, which concludes on Friday at 1700 local time and the winner is set to be announced on Monday. Sunak, the frontrunner in the first leg of the contest when his parliament colleagues voted him in as a finalist, has been trailing in the pre-poll surveys. His “Ready4Rishi” team has used this to frame his campaign around the theme of his self-confessed “underdog” status in the race.

“I’ve not decided to say the things that people may want to hear, I’ve said the things I believe our country needs to hear,” said Sunak.

“Although it hasn’t made my life easy, it is honest and, for me, that is what leadership is all about,” he added, reiterating his central message of fighting inflation before any tax cuts – in contrast to Truss’ campaign theme of cutting taxes from day one as the new Prime Minister.