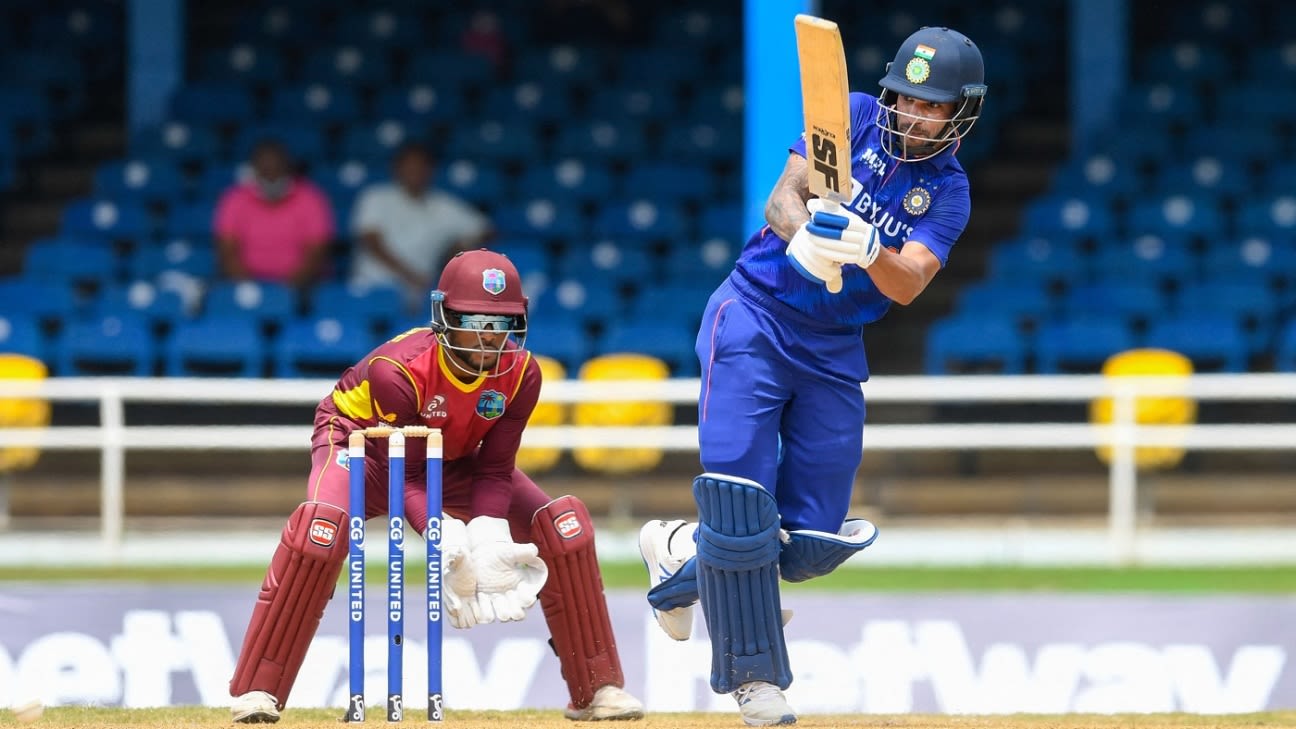 Shikhar Dhawan loves playing the flute. It gives him a sense of calm. He has also embraced spirituality, which he believes has opened his eyes to a world of positivity.

“I learned it through spirituality,” Dhawan said, when asked how he has maintained a sense of calm through the several highs and lows in his career. “You need to practice [having a calm mindset] just like you practice cricket.

“It’s something I try and pass on to the youngsters as well. As cricketers, we are all living our dream and if you don’t live happily [despite that], what’s the point? It’s small things like these. I don’t try and let negativity seep in. I try to be positive always.”

It’s perhaps this mindset that allows Dhawan to accept circumstances easily. Just a one-format player presently, Dhawan said he “loves the 50-overs game” and is out to continue his good work from the Caribbean, where he led India to a 3-0 sweep in the ODIs. His 168 runs, including two half-centuries, made him the second-highest run-getter in the series after Shubman Gill.
Dhawan is returning to Zimbabwe for the first time in nine years. Coming back to Harare is bound to elicit happy memories. In the second ODI of that 2013 tour, he struck a match-winning 116. He hopes the upcoming series will bring even more runs on what he thought are “great batting wickets”.
He is, however, clear runs won’t come easy. Zimbabwe’s recent run of form – they beat Bangladesh 2-1 earlier this month – will keep India on their toes. “It’s good they won against Bangladesh,” Dhawan said. “I’m sure they’re playing good cricket. It’s good for us, because it will keep us on our toes. We can’t take anything for granted or lightly. We’re here to perform against a good team. It’s always about the process.”
Dhawan did admit not knowing much about the current Zimbabwe side, even though he acknowledged Sikandar Raza was a “good player who has been doing well for many years now.” He did state, though, that they will have all bases covered come August 18, especially by channeling technology and data of their opponents in the right way.

“We don’t play that much cricket [against each other], but we have all the data,” he said. “From there, we find out the opponent’s strengths and weaknesses. I guess that is where technology comes in handy. In one game, you get to know the patterns pretty quickly. Even before that we use technology to get going with our planning.”

Dhawan was happy to see KL Rahul back. Rahul over the captaincy that was initially takes handed to Dhawan. Rahul will be returning to competitive cricket for the first time since the IPL, following a long rehabilitation for a sports hernia and then Covid-19.

“It’s very good news that KL is back in the side,” Dhawan said. “He’s one of the main players of the Indian team and with the Asia Cup coming up, it’s going to be a good outing for him. I’m sure he’ll gain a lot from this tour. It’s sad that Washington [Sundar] is out, it is part and parcel of sport. These things happen. Hope that he recovers soon.”

Dhawan was also boisterous about the IPL having thrown up several options at the top of the order, and not necessarily think of them as competition. The 16-man squad has as many as five opening options. Dhawan aside, there’s Rahul, Gill, Ishan Kishan, Ruturaj Gaikwad and even Sanju Samson, who has played a similar role in the IPL.

“With more exposure, they’re quite confident,” Dhawan said of his younger colleagues. “Everyone’s different. They have good techniques. The transition for the Indian team has been great due to domestic cricket and IPL. Their confidence levels are high, that’s they blend into international cricket quite quickly. feel great that we’ve got so many options, so it’s a very healthy sign for us.”

Dhawan felt the upcoming three-match series was equally an opportunity for Zimbabwe to show their improvements as a team. “It’s good for world cricket that we’re playing each other,” he said. “It will give them confidence. Our young boys will get opportunities in different conditions. It’s only by playing that Zimbabwe will also get better, especially against quality sides. That’s how they will also learn.”